Sana Javed is one of the sweethearts of the Pakistani entertainment industry. From her mystifying looks to an innocent smile, she conquered our hearts the moment she stepped into the industry.

From her strong acting to powerful projects, we have seen her in some exceptional roles in the last few years.

Now, she is working on another exciting project and we are just rooting to see some more details of what is it about, and when is it going to hit the screens.

In a recent story shared on her Instagram account, Sana gives a sneak peek of the new script she is working on. 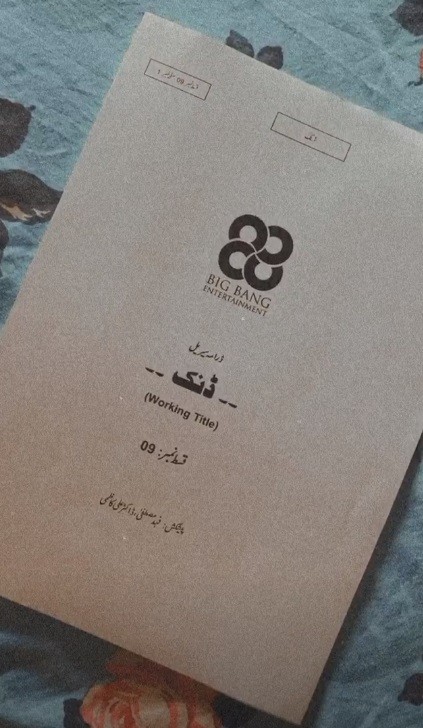 Presented by Fahad Mustafa and Dr. Ali Kazmi, the drama serial is the Big Bang Entertainment Production and has the working title of ‘Dunk’. What does the word mean and what does it indicate, we are unsure of that?

At this point and time, we are not even sure if it is going to remain the title until the drama hits the screens.

Hence, we will have to wait and see till it goes on air to either understand the meaning behind the name or to have another name replace it.

When Will ‘Dunk’ Be Released?

The picture details the script of the ninth episode of the drama, which means that the other eight episodes of it have already been shot.

This also means that there are many more to come, as many Pakistani dramas generally stem in-between the range of 24-28 episodes. Nothing officially has been revealed as of yet.

Who Will Be Starring Opposite Sana?

As mentioned, even though, we haven’t officially heard from the team yet but Sana herself gave another peak to the production life of her upcoming drama. In an Instagram post shared about a week ago, she was seen posing for the camera with Bilal Abbas Khan.

In the picture were Badar Mehmood and Fahad Mustafa, who we believe are a part of the directorial and production team. This means that Sana will be pairing opposite Bilal Abbas Khan for the first time in a drama serial.

Sana has previously worked with Badar in one of the most popular drama serials of her career – Cheekh. However, her pair Bilal who is famous for her cute looks and charming appearance on the screen is the first.

We can’t wait to see when this drama will be hitting the screens, because it has a promising team that we surely want to see together.

Mati
Mati-Ullah is the Online Editor For DND. He is the real man to handle the team around the Country and get news from them and provide to you instantly.
Share
Facebook
Twitter
Pinterest
WhatsApp
Previous articleOver 47 Indian soldiers killed in Galwan Valley Ladakh by Chinese forces
Next articleIndia’s Hindutva agenda to destroy regional peace and security: FM Qureshi