Details of safety features i.e. Airbags and Anti-Lock Braking System (ABS) of locally manufactured 800 CC – 1800 CC Cars in Pakistan are as under; 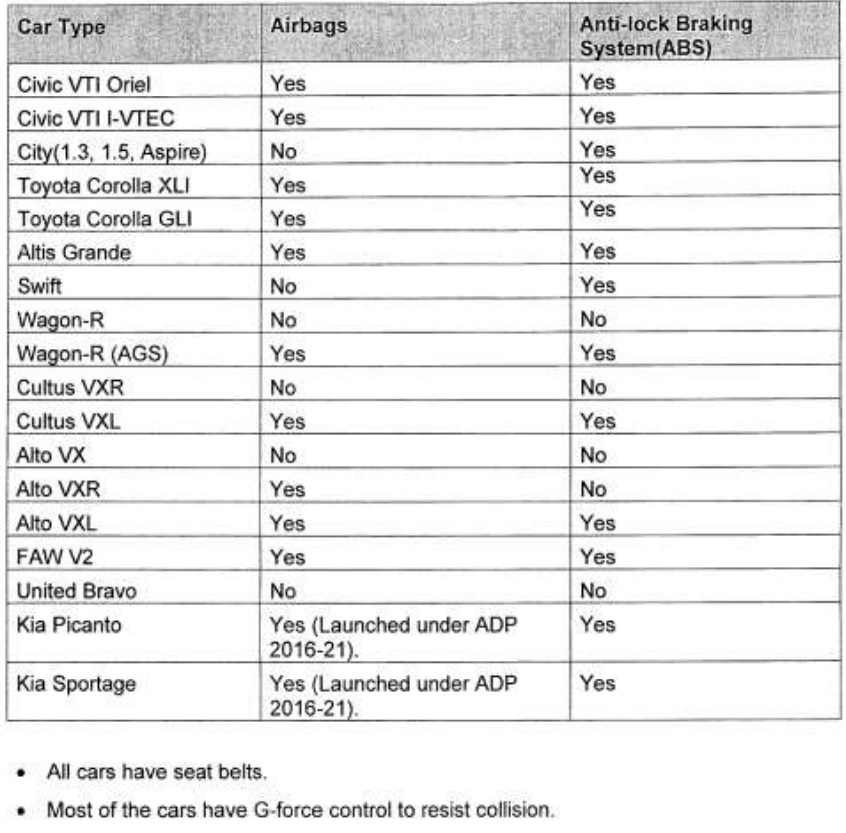 Few features in various models are not at par with international standards due to the absence of regulatory framework in Pakistan. However, to address the issue, Auto Development Policy (ADP) 2016-21 envisaged adoption of UNECE’s WP 29 Regulations. Accordingly, the Summary from the Cabinet has been approved and the Ministry of Foreign Affairs is approached for Pakistan’s case of becoming a member of Working Party (WP)-29.

The safety standards of vehicles including cars and heavy vehicles are expected to conform to international requirements by adoption of international UNECE’s regulations.

Note: The above information was provided to the Senate on January 17, 2020 by the Minister for Industries and Productions:

The minister further apprised that House that the Pakistan Standards and Quality Control Authority (PSQCA) have a legislative mandate to develop standards to which manufacturers must conform and certify compliance. At present, no authority/department monitors implementation of locally manufactured car standards as these are not on PSQCA’s mandatory list. However, once the standards are developed and notified, PSQCA can ensure implementation of the said standards in cars manufactured locally.

Reportedly car manufacturers follow the manufacturing standards of their international principals. The engines of cars are mostly Euro-II compliant as the petrol/gasoline available in Pakistan is of Euro-II standard.

The penalties can be prescribed once standards are notified by the relevant authority.

Mati
Mati-Ullah is the Online Editor For DND. He is the real man to handle the team around the Country and get news from them and provide to you instantly.
Share
Facebook
Twitter
Pinterest
WhatsApp
Previous articleReason behind severe cold in Karachi, flood in Dubai and heat in US in January
Next articleNow you can buy PSL 2020 Tickets online on Yayvo