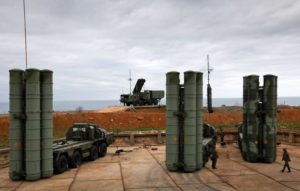 BAKU, Azerbaijan: Russia will deliver its S-400 Missile Defense System to India by 2025, for which it has initiated its production, the Chief Executive Officer (CEO) of the Russian Rostec State Corporation Sergei Chemezov said.

“The advance payment has been made. I don’t want to specify an exact figure, but there is an advance payment. We have launched production and the work is underway, and everything will be implemented as scheduled. The contract will be fulfilled by 2025,” Sergei Chemezov told Dubai Airshow 2019 according to a report by Azerbaijan’s State News Agency AZERTAC.

India announced its plans to purchase Russia’s S-400 Missile Defense System in 2015. The $5.43 billion contract on the S-400 supplies was signed when the Russian President Vladimir Putin undertook a visit to India last year.

Mati
Mati-Ullah is the Online Editor For DND. He is the real man to handle the team around the Country and get news from them and provide to you instantly.
Share
Facebook
Twitter
Pinterest
WhatsApp
Previous articleKyrgyzstan’s public debt grew to $4.503 billion
Next articleRestore people’s trust in judicial system, PM Imran Khan appeals to Justice Khosa and Justice Gulzar