RSS plans to use social media to propagate its hate ideology 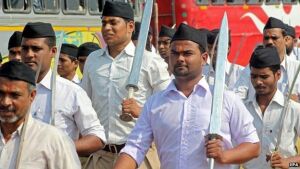 Reports said that the RSS will soon establish its own IT Cell and through it, the outfit’s volunteers will disseminate their agenda and inculcate their toxic ideology in people’s minds.

Reports further said that the RSS aims at to use social media as a powerful communication tool to propagate its hate ideology more robustly in every nook and cranny of the Country.

In this regard, the RSS’s workers will be imparted the required training to effectively use the IT Cell.

Furthermore, the terror outfit will create a significant number of digital volunteers who will join the virtual meeting and eventually as per the instructions, spearhead the RSS’s initiatives at the grassroots level.