Monitoring Desk: “China should sync its private as well as public media in a way Russia had already done and RT has become the biggest threat to western powers therefore it was banned in Europe after the Ukraine-Russia conflict while setting aside all so-called European norms of freedom of expression and free media. Chinese media provides important information and state narrative but still lacks having a strong impression on the user’s mind as the RT does”.

This was observed by Prague-based foreign affairs expert Shazia Anwer Cheema in her article titled “Immersive Media in China and forthcoming 20th Congress of the Communist Party” published in daily Pakistan Today on Friday.

She writes that the forthcoming 20th Congress of the Communist Party of China (CPC) will be held on October 16, 2022, and the entire western media is keeping an eye on this event foreseeing that Xi Jinping will get his third term with more powers to steer the country according to his vision. She was of the view that the western media always gives a western version of the rise of China and the iron grip of President Xi Jinping over the system and deep down negativity is part of anything that is published or broadcast in western media. Nonetheless, the interest of western media in the forthcoming CPC Congress indicates this event is taken as important and significant. 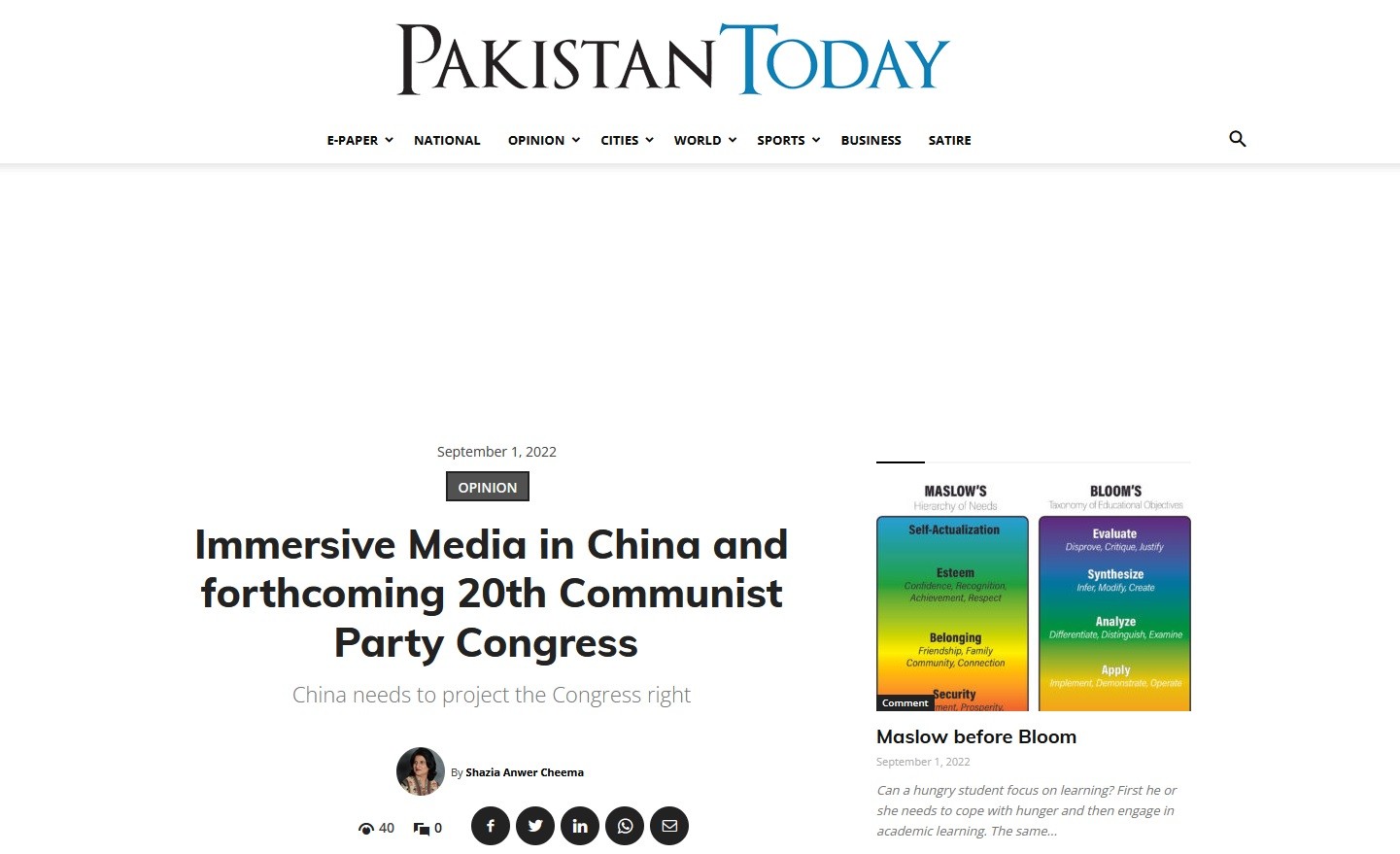 “On August 29 I attended a dialogue organized by the Pakistan-China Institute (PCI) on the upcoming 20th National Congress of the CPC under the flagship ‘Friends of Silk Road’ initiative where Minister of State Hina Rabbani Khar, Senator Mushahid Hussain Sayed, Chairman Senate Committee and Chinese Ambassador in Pakistan Nong Rong and a number of Foreign Affairs experts explained the importance of forthcoming CPC Congress in relation to Pakistan-China relationship, BRI, and CPEC. My brief talk with Ambassador Nong Rong triggered my interest to understand why the world is looking at this Congress which is a routine event that takes place after every five years.  The foremost question one can ask is how this week-long event will determine the future course of Chinese politics, economy, and social growth. The answer needs an understanding of the importance of the event within the Chinese political system,” wrote Shazia Cheema.

Writing about the immersive media of China she said that China is characterized by its fast transformation from rigid government-owned structures into new business models, from the traditional press into new media and innovative forms of news making (immersive media) and the private media industry has become economically successful. China’s television industry has grown into a complete system with high-tech program production, transmission, and coverage. In Europe, one can watch CCTV-4 International, CCTV-9 International (in English, targeting an English-speaking audience), CCTV-E (in Spanish), and CCTV-F (in French). These channels are showing the beauty and culture of China and attract foreigners to visit the mysterious land of the East. These channels not only report important news and events that happen in China and around the world but also give introductions to China’s history, culture, landscape, and social developments.

“Whenever you read any research report about media written by western researchers/writers or funded by the western world, you will find loaded dictions like “state-controlled”, “censorship”, “absences of free media” etc. Channel 4, BBC, CNN, VOA, ABC and many more will tell you that Chinese media is state-funded or state control but they would not tell you personally that they are also directly or indirectly state-funded,” commented the writer.