Published By Jammu Kashmir Coalition of Civil Society (JKCCS) is available at www.jkccs.net and can be downloaded to click here

Researched and edited by Shrimoyee Nandini Ghosh, Vasundhra Kaul, Misbah Reshi and Mehroosh Shah, the report was first published in August 2020 in a short format and now is available in full format. 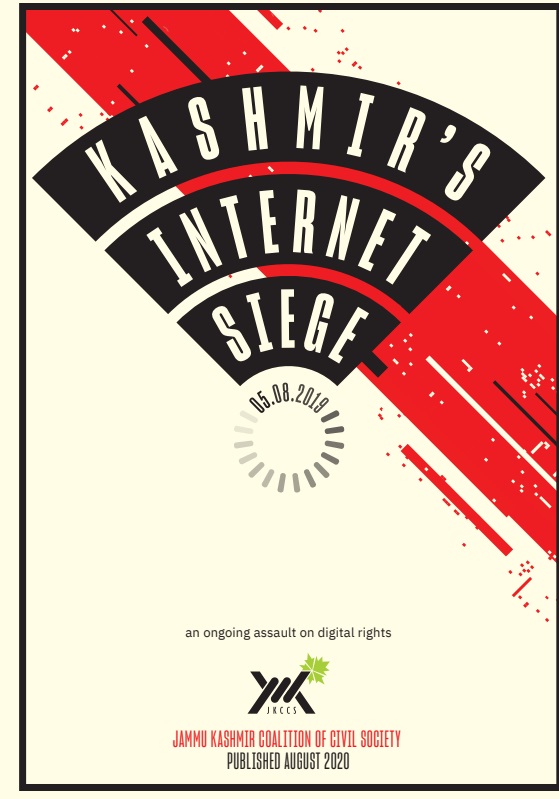 Here are important points raised in Report regarding Communication blockade imposed by Indian government on Kashmiris in Indian Occupied Kashmir. The Report says:

The Internet and social media play an essential role in democratizing the public sphere, facilitating social and economic engagement, mobility and communications, removing barriers to knowledge and information, all while creating an important avenue for solidarity and organizing.

India leads the world in ordering internet shutdowns, and both in terms of frequency and duration, Jammu & Kashmir accounts for more than two-thirds of the Indian shutdowns ordered. Localized shutdowns of the internet in specific districts or areas, often accompanied by mobile phone disruptions, are commonplace, sometimes lasting for upto a week.

Kashmir’s Internet Siege provides a more integrated, cross-sectoral, and wide ranging view of the devastating and all-encompassing impact of the government’s denial of communications and access to the internet

Digital sieges are a technique of political repression in Indian Occupied Kashmir and violates internationally and constitutionally guaranteed civil, political and socio-economic rights.

They curtail circulation of news and information, restrict social and emergency communications, and silence and criminalise all forms of political interactions and mobilisations as “militancy related” “terrorist activity” and threats to “national security”.

Internet shutdowns and restrictions in Kashmir also raise important questions of collective punishment in the context of an ongoing armed conflict, where the framework of international humanitarian laws applies.

The digital siege is constituted by varied forms and phases of network disruptions and shutdowns.

Justice saw systemic delays further compounded by ineffective online hearings. Amidst the internet and telecommunications blackout, more than 6000 detentions and over 600 ‘administrative’ detentions took place around August 5th 2019. Of habeas corpus petitions filed for the release of illegal detainees during the period, 99% remain pending.

Press freedoms and the right to freedom of speech, expression and social participation suffered from the direct impact and chilling effects of online surveillance, profiling and criminal sanctions, with police complaints registered against working journalists and over 200 social media and VPN users.

This report unpacks the contexts of these disturbing facts, situating them in the light of fundamental human rights to livelihood, health, education, access to justice, freedom of press, free speech and expression, and social and cultural participation. The Covid-19 pandemic and the militarised lockdown in Kashmir re-instituted severe restrictions of mobility and public gatherings, compounding and complicating public health and other challenges of the network disruption. Despite widespread calls to restore full internet connectivity, and constitutional litigation before the Indian Supreme Court, the state continues to justify the throttling of internet speeds on grounds of national sovereignty, dismissing the concerns of international and Indian civil society actors.

Unsurprisingly, the internet shutdown of August 2019 had an enormous impact on digital access and teledensity in the region

Kashmir’s Internet Siege argues that the multi-faceted and targeted denial of digital rights is a systemic form of discrimination, digital repression and collective punishment of the region’s residents, particularly in light of India’s long history of political repression and atrocities. The promise of lasting peace, freedom and justice for the people of Jammu & Kashmir is inextricably tied to digital and human rights in the region.

Jammu & Kashmir is under lockdown because of the Covid-19 pandemic. Yet, unlike the rest of the world, currently 12.5 million people in the region can barely video call their friends or family, attend online classes, webinars or conferences, use apps to have their groceries or medicines delivered, entertain themselves by streaming a film, or download the latest World Health Organization (WHO) recommendations and health guidelines. For the Internet in Kashmir has been restricted by the government, and mobile internet bandwidth is officially throttled to 2G levels (upto 250 kbps), a speed which does not allow full functionality for most web sites and web based applications. This present situation of highly restricted internet speeds is only the latest development in an on-going situation which saw a complete internet shutdown as well as the blocking of all communications technologies (including voice calling on fixed line and mobile phones). These had been instituted as a “precautionary” security measure in the run-up to the political changes that were initiated in Jammu & Kashmir on August 5th 2019.

Kashmir’s Internet Siege provides a more integrated, cross-sectoral, and wide ranging view of the devastating and all-encompassing impact of the government’s denial of communications and access to the internet (and the throttling of internet speeds once access is restored).

Kashmiris are long accustomed to sieges, which feature highly intrusive security measures that include blockading of arterial roads and entry and exits to the Kashmir valley, curfew-like restrictions on mobility, mass preventive detentions, and telecommunication and internet blackouts. However, this time around the intensity of measures underway, including large scale troop movements, the mass evacuations of tourists, of non-Kashmiri students, and of Hindu pilgrims on the Amarnath Yatra pilgrimage, all ostensibly due to a “terrorist” threat, created widespread and unprecedented panic.

According to statistics published by the Telecom Regulatory Authority of India (TRAI, 2019) undivided Jammu & Kashmir had a total of 11.44 million telecommunications subscribers (both phones and internet) and 6.60 million internet subscribers (more than double of 3.65 million subscribers in 2014.) Broadband internet subscribers numbered 5.90 million (up from only 0.53 million in 2014) while wireless internet subscription (referred to as mobile internet) was at 6.49 million. Unsurprisingly, the internet shutdown of August 2019 had an enormous impact on digital access and teledensity in the region. New Indian Express reported that “wireless subscription data released by TRAI shows that the region also recorded a sharp dive in its overall mobile subscriber base during August and September [2019], shedding a net 2.58 lakh [258,000] users.” The contraction in mobile user base in the same period saw the region record a net decline of 115,000 wireless subscribers during the period, compared to a net addition of 144,000 mobile connections during the previous quarter ended June 30, 2019. A loss of 1.4 million telecom subscribers and a negative growth of 12.59% of Kashmir’s telecom sector were recorded in the first quarter of 2020, the Andalou Agency reported.

India leads the world in ordering internet shutdowns, and both in terms of frequency and duration Jammu & Kashmir accounts for more than two-thirds of Indian shutdowns. There have been 226 documented internet shutdowns in Jammu & Kashmir since the year 2012. Currently, even the 2G internet access available to Kashmiris remains extremely precarious as localized shutdowns of the internet, often accompanied by mobile phone disruptions, remain commonplace, sometimes lasting for a week. As this report goes to press, there have been 70 separate shutdowns in 2020.

Digital rights violations in Kashmir also cover a broad plethora of instances, ranging from complete telecommunication blackouts to the throttling of speed, partial and localised shutdowns or content blocking affecting certain kinds of access or users, ‘white-listing’ and ‘black-listing’ of websites, ‘shadow bans’, and the unauthorised use of surveillance and jamming technologies. The legal basis and grounds for imposing such restrictions are rarely made public, although the recent judgments in Anuradha Bhasin v. Union of India and Foundation for Media Professionals v. Union Territory of Jammu & Kashmir have somewhat ameliorated this position in the law. The climate of deniability and lack of accountability for violations is compounded by the multiplicity of legislation, broad discretionary executive powers, and the lack of effective judicial redress.

Although the legal basis of internet restrictions were rarely made public prior to the Bhasin judgment, in practice police authorities issued oral or tersely worded one line written directives to Internet Service Providers (ISP) instructing them to summarily restrict or suspend operations, and to file ‘compliance reports’. An example of such secretive, arbitrary and unlawful orders issued by the Jammu & Kashmir Police, as a ‘preventive measure to avoid any law and order problems and passing of rumours by miscreants/anti national elements’ was documented by Amnesty International during the course of an earlier prolonged internet shutdown and social media ban in 2016-2017. Such orders are also subject to official deniability: in response to a Right to Information query, asking for copies of orders which formed the basis of the shutdowns of internet and telephone services in July 2016, both the Home Department, Jammu & Kashmir (in charge of the Police) and the Divisional Commissioner, Kashmir (the highest executive authority in the Kashmir districts) stated that no such orders were issued by their office.

The views and opinions expressed in this article/Opinion/Comment are those of the author and do not necessarily reflect the official policy or position of the Dispatch News Desk (DND) and DND Thought Center. Assumptions made within the analysis are not reflective of the position of Dispatch News Desk.