LAHORE, Pakistan: realme Pakistan upped its game in the affordable smartphone segment by introducing two new models of realme 6 Series at their online launch event on their Official Facebook page.

Both devices support 30 W quick charging with VOOC adapter in the box. 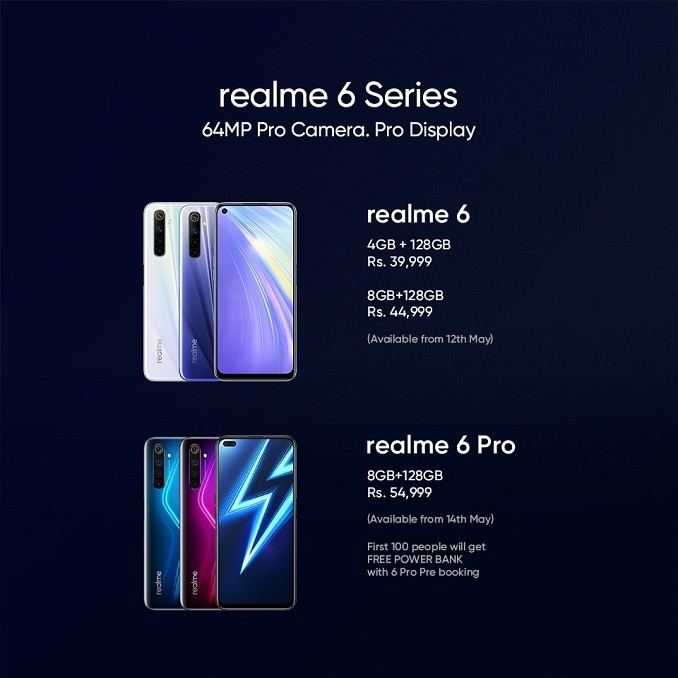 This is the first realme smartphone with Mediatek’s gaming-oriented G90T chipset. The 12nm platform brings an octa-core CPU with two 2.05GHz Cortex A76 big cores and six 2GHz Cortex-A55 power efficient cores, Mali-G76 MC4 GPU and is coupled with either 4GB, or 8GB RAM.

The realme 6 packs a 6.5” LCD, with resolution FullHD+ and it comes with 90Hz refresh rate. It has Gorilla Glass 3 on top and a punch hole for 16MP F/2.0 selfie camera with relatively large 1/3.1″ sensor.

There are four snappers on the back – 64MP main one with Samsung ISOCELL Bright GW1 sensor, 8MP f/2.3 ultrawide unit, 2MP dedicated macro shooter and a 2MP B&W auxiliary unit for enhancing the portrait shots.

On the inside, there is also a 4,300 mAh battery that could be charged in one hour with the 30W charger in the box.

The realme 6 Pro sports a 6.6” LCD with 90Hz refresh rate and FullHD+ resolution, which has a dual punch hole that hosts two selfie cameras. Those include a 16MP f/2.0 Sony IMX471 module and an 8MP ultrawide snapper with 105-degree field of view.

The setup on the back is also impressive – the main 64MP camera is accompanied by a 12MP f/2.5 telephoto shooter, an 8MP ultrawide angle snapper, and 2MP macro lens. The realme 6 Pro supports UIS and UIS Max Video Stabilization.

The battery of the realme 6 Pro is the same as its vanilla sibling – 4,300mAh cell with support for 30W fast charging.

The realme 6 Pro with two exciting Lightning Blue and Lightning Red colors is priced at Rs 54,999 for the 8/128GB version.

Mati
Mati-Ullah is the Online Editor For DND. He is the real man to handle the team around the Country and get news from them and provide to you instantly.
Share
Facebook
Twitter
Pinterest
WhatsApp
Previous articleConstruction of Diamer Bhasha Dam ready to go underway
Next articlePakistan starting local production of smartphones!