ISLAMABAD, Pakistan: The routine life in Twin Cities of Rawalpindi and Islamabad has once again been disturbed immensely with the closure of routes and suspension of cellular services as the activists of Tehreek-e-Labbaik Pakistan (TLP) led by Khadim Hussain Rizvi have staged another sit-in at Faizabad.

Despite heavy rain, thousands of TLP activities gathered in Rawalpindi on Sunday against blasphemous caricatures in France but soon the situation turned tense when a clash occurred between the police and the demonstrators.

The police personnel used tear gas to disperse the crowd and in response the latter pelted stones at the law enforcers, turning Rawalpindi’s Liaquat Bagh area into a battlefield.

Reportedly, injuries were inflicted upon both sides. The Station House Officer (SHO) of Waris Khan Police Station Abdul Aziz was also among the injured. 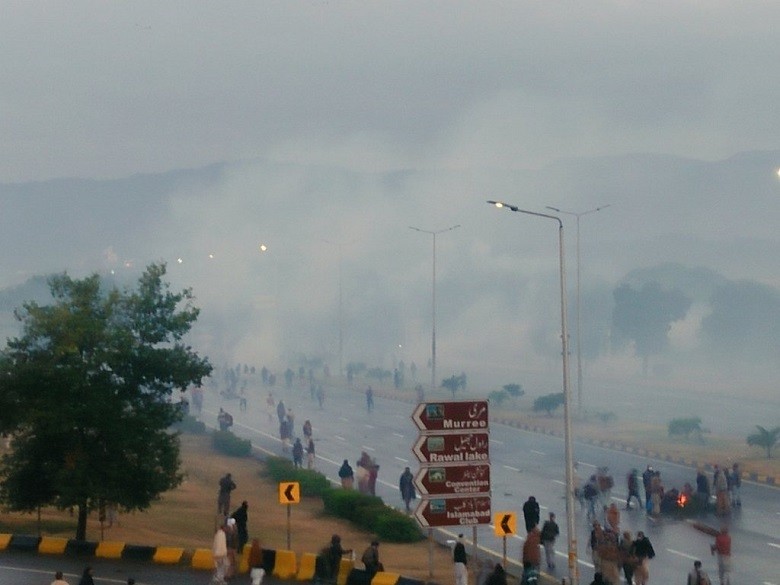 In the meantime, police arrested dozens of TLP protestors.

However, about 3,000 protestors yet succeeded to reach Faizabad Interchange and staged a sit-in.

The TLP protestors were of the view that they didn’t intend to stage a sit-in or resort to violence but the police batten charged them, used heavy tear gas and apprehended the peaceful marchers.

They said that they demanded the federal government to close the French Embassy, expel the French envoy, and announce the boycott of French products at the government level.

Meanwhile, the law enforcers sealed entry points to both Rawalpindi and Islamabad with shipping containers, and made traffic diversions.

The Deputy Commissioner Muhammed Hamza Shafqaat in a tweet on Monday morning apprised that Islamabad Expressway from Zero Point till Khanna Bridge will stay sealed.

Hamza Shafqaat asked the commuters to use alternate routes.

Mati
Mati-Ullah is the Online Editor For DND. He is the real man to handle the team around the Country and get news from them and provide to you instantly.
Share
Facebook
Twitter
Pinterest
WhatsApp
Previous article
Esra Bilgic Proves She is Irresistibly Hot and Stunning – Pictures Inside!
Next article
Top 10 Drama OSTs That Have Made Way Directly To The Heart! [Videos]
Share
Facebook
Twitter
Pinterest
WhatsApp