ISLAMABAD, Pakistan: The Minister of State for Finance and Economic Affairs Rana Muhammad Afzal Khan on Friday invited investment by the French Companies in the food industry, pharmaceuticals, skill development and railways sectors.

Talking to the ambassador of France to Pakistan Marc Barety who met him at the Economic Affairs Division in Islamabad and discussed matters relating to Pak-France economic cooperation, the State Minister said Pakistan’s fast growing economy was opening new avenues for investment.

Rana Afzal said the government would continue to facilitate such initiatives. 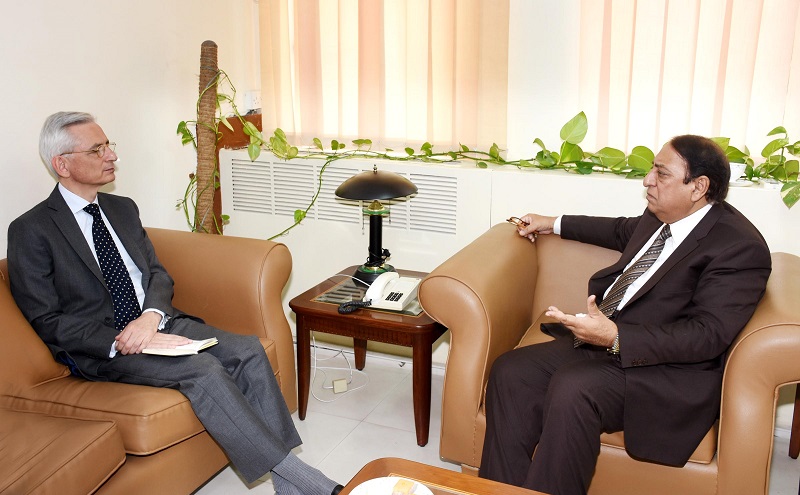 The French ambassador informed the minister about the great importance France attaches to relations with Pakistan.

Marc Barety expressed the hope that during his tenure as Ambassador to Pakistan, bilateral relations between Pakistan and France would be further strengthened.

The ambassador also hinted at the possibility of greater involvement of the French Development Bank (AFD) in the project financing in Pakistan which presently hovered around Euro 100-150 million per annum.

Mati
Mati-Ullah is the Online Editor For DND. He is the real man to handle the team around the Country and get news from them and provide to you instantly.
Share
Facebook
Twitter
Pinterest
WhatsApp
Previous articleVegetable ghee, cooking oil production increase 7.9%, 4.50 % in Pakistan
Next articlePakistan will continue to participate in UAE Exhibitions: Miftah