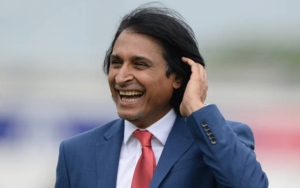 ISLAMABAD, Pakistan: The former Pakistan Captain and renowned Commentator Ramiz Raja is set to be appointed as the 35th Chairman of the Pakistan Cricket Board (PCB), replacing Ehsan Mani whose three-year tenure will end on August 25, 2021.

The approval to his name for the post was awarded by Prime Minister Imran Khan, who is also the patron of the PCB.

The approval followed a meeting between Prime Minister Imran Khan and Ramiz Raja in Islamabad on Monday.

The incumbent Chairman PCB Ehsan Mani was also present in the meeting. He briefed the prime minister about the structure of domestic cricket in the Country.

Now following the approval by the prime minister, Ramiz Raja’s name along with another name will be forwarded to the PCB Governing Body which will elect the former opening batsman as the new Chairman PCB.