ISLAMABAD, Pakistan: The Foreign Minister Shah Mahmood Qureshi has reaffirmed Pakistan’s commitment to the principles and objectives of the SAARC Charter for the welfare of the people of the region, economic integration, and regional prosperity.

Talking to the Secretary-General of South Asian Association for Regional Cooperation (SAARC) Esala Ruwan Weerakoon at the Ministry of Foreign Affairs in Islamabad on Wednesday, the foreign minister said that Pakistan believes SAARC could provide a conducive and congenial atmosphere to build economic synergies and transform the quality of life of the people of South Asia. 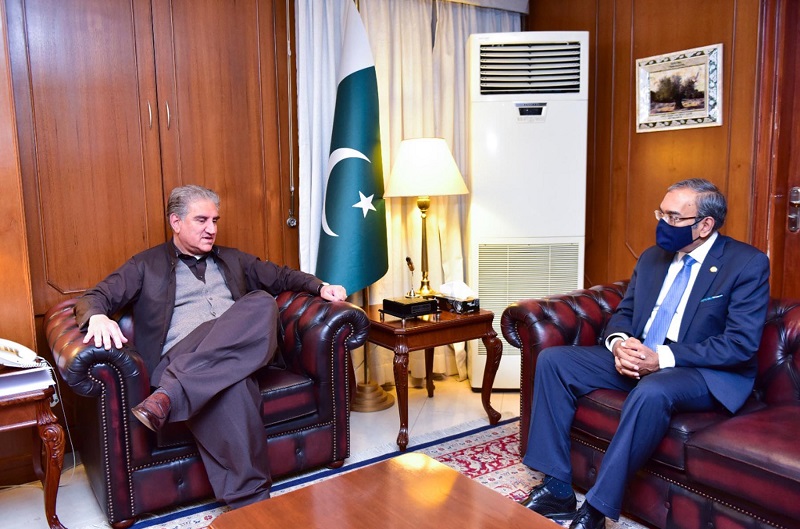 The foreign minister recalled the important and constructive role played by Pakistan in realizing the true potential of SAARC and making it a useful organization for regional cooperation and mutual benefit based on the principle of sovereign equality.

Shah Mahmood Qureshi reassured the SAARC secretary-general of Pakistan’s strong support for regional cooperation and urged him to accelerate the pace of SAARC process.

The foreign minister also reiterated Pakistan’s commitment for hosting the SAARC Summit when the artificial obstacles created in its way would be removed.

Expressing condolences on the death of the Sri Lankan national Priyantha Kumara, the foreign minister said that entire political leadership, religious scholars and Pakistani nation had condemned the incident and the government of Pakistan was determined to take all necessary steps to bring perpetrators to justice.

The SAARC secretary-general thanked the Foreign Minister Shah Mahmood Qureshi for sharing his views on different SAARC related issues and assured to make concerted efforts to strengthen cooperation among Member States so as to realize the full potential of SAARC.

The SAARC Secretary-General Esala Ruwan Weerakoon is on his first visit to Pakistan since assuming office in March 2020.