ISLAMABAD, Pakistan: The delegation-level talks between Pakistan and Russia are in progress at the Ministry of Foreign Affairs in Islamabad on Wednesday, the Dispatch News Desk (DND) news agency reported.

The two sides are discussing ways to strengthen Pakistan-Russia bilateral relations and deepen their multi-faceted cooperation.

Talking to the Russian delegation, Qureshi welcomed them on their arrival in Pakistan and expressed sorrow over the loss of human lives in Russia due to COVID-19.

Shah Mahmood Qureshi said that I am glad that the bravery with which Russia has faced the global epidemic challenge is commendable. He said that a number of Countries including Pakistan are benefiting from the Russian Sputnik 5 vaccine.

The foreign minister said that the frequent contact between Prime Minister Imran Khan and the Russian President Vladimir Putin is a testimony of stability in bilateral relations.

Qureshi said that Pakistan has shifted its geo-political priorities into geo-economic priorities.

Reiterating the resolve to further strengthen its bilateral cooperation with Russia in multiple fields, Qureshi said that Pakistan is providing many facilities including e-visa to foreign investors to invest in Pakistan.

During the talks, the two sides agreed to hold the next meeting of the Intergovernmental Commission on Economic Cooperation soon.

Shah Mahmood Qureshi said that Pakistan is committed to the early launch of the “Stream Gas Pipeline Project” in partnership with Russia.

The foreign minister also apprised the Russian delegation about the human rights violations and atrocities being committed by the Indian forces in Occupied Jammu and Kashmir. He said that Pakistan is desirous of peace in the region and wants to resolve all issues including Kashmir through dialogue.

The delegation-level talks will be followed by a joint press stakeout by the two foreign ministers.

Shah Mahmood Qureshi will also host a luncheon in the honor of his Russian Counterpart. 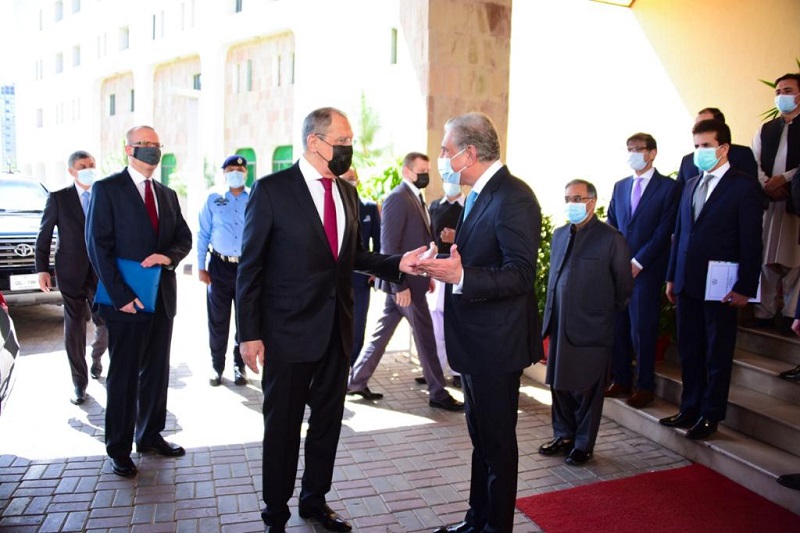 Earlier on his arrival at the Ministry of Foreign Affairs, Sergey Lavrov planted a sapling in the premises of the ministry.

The Russian Foreign Minister Sergey Lavrov is on a two-day visit to Pakistan from April 6-7, 2021.

Besides his meeting with Shah Mahmood Qureshi, Sergey Lavrov will also call on Prime Minister Imran Khan and have interaction with other dignitaries.