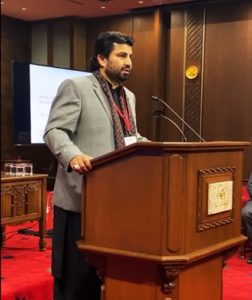 OTTAWA, Canada: The Deputy Speaker of National Assembly of Pakistan Mr. Qasim Khan Suri attended the Conference of Speakers and Presiding Officers of Parliaments of the Commonwealth Countries held at the Canadian Parliament in Ottawa.

In his address, the Deputy Speaker Qasim Suri emphasized on promoting knowledge and understanding of Parliamentary democracy in its various forms and to develop Parliamentary Institutions.

The Conference aims to maintain, foster, and encourage impartiality and fairness on the part of Speakers and Presiding Officers of Parliaments of the Commonwealth members.

The Conference brings together the Speakers and Presiding Officers of the national parliaments of the independent sovereign states of the Commonwealth. It was created in 1969 as an initiative of the then Speaker of the House of Commons of Canada.

The Deputy Speaker also met with the representatives of other Countries and discussed importance of parliamentary exchanges.

Mati
Mati-Ullah is the Online Editor For DND. He is the real man to handle the team around the Country and get news from them and provide to you instantly.
Share
Facebook
Twitter
Pinterest
WhatsApp
Previous articleInfinix’s Annual Channel Appreciation Award 2020
Next articleDetail of Chinese Scholarship Programs for Pakistan