What Happened In Episode 19 Of Pyar Ke Sadqay

As we discussed a twist in the story from the 19 episode in drama serial Pyar Ke Sadqay, this episode had something in progress to that of what we watched in episode 18. Sarwar is on the go to succeed in his plan by installing Shanzay once again in Abdullah’s life and make him distract from Mahjabeen.

Shanzay has finally got the support from his father when he himself witnessed Shanzay’s husband’s rude behavior and violence against his daughter. He not only bashes his son-in-law for torturing Shanzay but also directs him to get out of the house. Shanzay is finally seeking a divorce from her recent marriage. 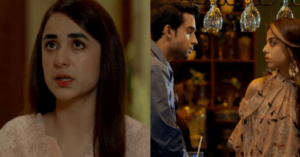 On the other hand, Shanzay is getting inclined to Abdullah now while even knowing that he is married to Mahjabeen now. She visits Abdullah’s office again in an extremely depressed mood and the conversation between them ends up on Shanzay’s question from Abdullah if he will get married to her or not as she gets divorced to which he responds positively.

Coming to Mahjabeen, she is waiting to receive Abdullah from office when only Sarwar appears at the door and discloses about Abdullah being once again attracted to Shanzay. He tries to break Mahjabeen’s trust in Abdullah and proceeds with a bad touch to which Mahjabeen shows extreme discomfort.

Being disturbed by the news broken by Sarwar to Mahjabeen about Abdullah’s betrayal, she calls her parents and narrates the whole story but her parents encourage her to stay patient and obedient to her husband so that they can proceed with a good relationship in future. However, Munshi Jee, Mahjabeen’s father himself happens to see Abdullah somewhere outside having fun with Shanzay which makes him feel concerned about his daughter.

Abdullah is getting more lovable to Shanzay and furious to Mahjabeen which is hurting his innocent wife. She is out of understanding about how to get her husband attracted to her when she has already changed herself a lot merely in the love for Abdullah. The situation is getting unpleasant and more of a successful plan for Sarwar but there is a lot more to open up yet. Here is the complete video of the latest episode:

So, all of you stay tuned to Hum TV and watch the lovely story Pyar Ke Sadqay every Thursday at 08:00 PM.