Pushing Kabul to Moderate its Rule

Monitoring Desk: “After the Taliban takeover of Afghanistan in August, foreign aid has frequently been framed as a possible lever the international community can use to push them to moderate their rule. United Nations Secretary-General António Guterres has argued after the takeover that “humanitarian assistance is an entry point for effective engagement with the Taliban.”

This is observed by a veteran journalist M Ziauddin in his article “Pushing Kabul to moderate its rule” published by Pakistan Observer Islamabad.

Hereunder is his full article that can also be read to click this link at Pakistan Observer. 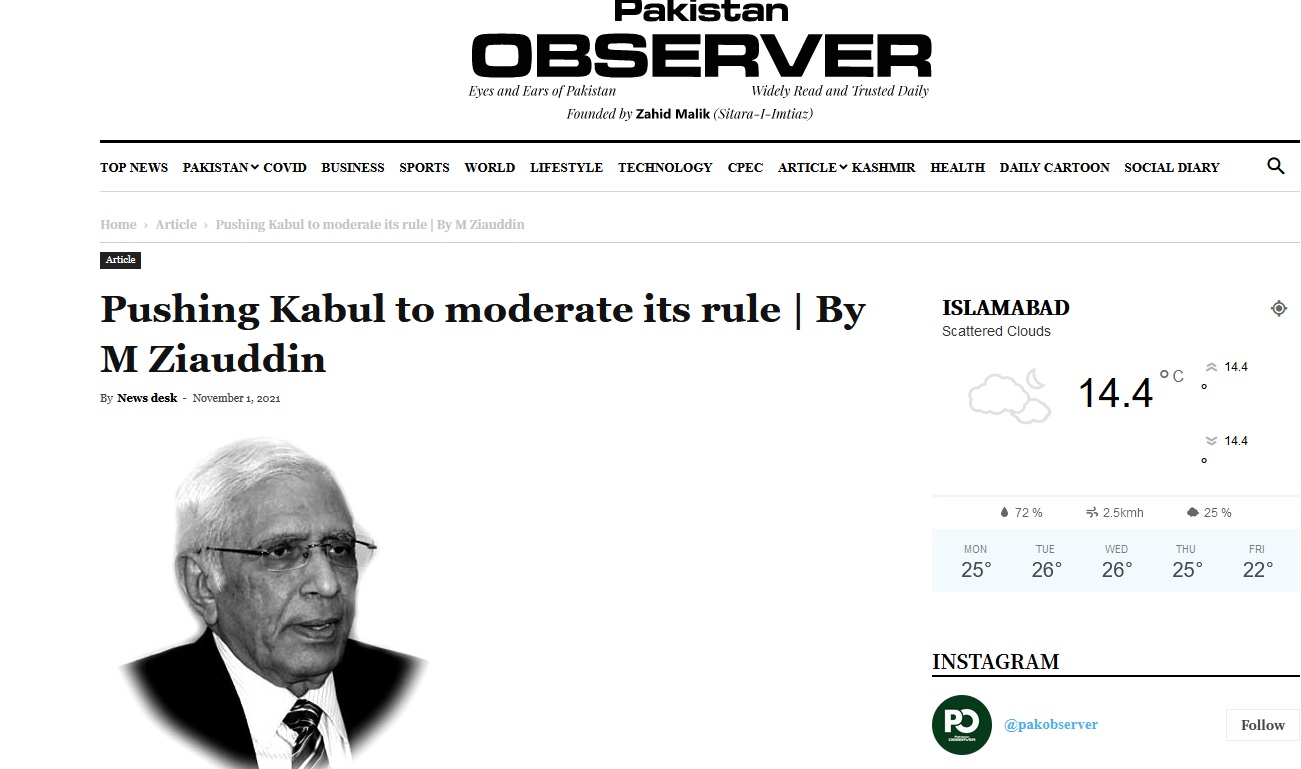 HAD the Afghan Taliban wanted to manage their government in accordance with a system similar to the ones that are being worked the world over by democracies of various colours and creeds, perhaps they would have entered into power sharing negotiations with the Ashraf Ghani government to form an interim one which in turn would subsequently hold a proper general elections with Afghan Taliban participating as a legitimate political party.

This is what the peace accord the Afghan Taliban had signed with the US- led withdrawing powers had desired.

But the very purpose of fighting the long wars against the occupying powers—first against the socialist occupiers and then against the so-called democratic ones—was, it seems, to develop and work their own system of governance based strictly on Islamic tenets and Sharia and not to order their lives in accordance with the socialist or democratic tenets in practice in various parts of the world currently.

In the interim what is happening, however, is, a government made up of former fighters and sanctioned terrorists with little to no experience of governing, are seemingly failing to cope with any of the political, social and economic challenges facing the country currently, let alone the deteriorating administrative and security situation.

As a result, the ISIS-Khorasan is consolidating its position rapidly and the world at large continues to with-hold recognition and the much needed economic assistance hoping that the Afghan Taliban would be forced by the gimmick to do what they did not under direr circumstances.

That is why perhaps since the Taliban takeover of Afghanistan in August, foreign aid has frequently been framed as a possible lever the international community can use to push them to moderate their rule.

United Nations Secretary-General António Guterres has argued after the takeover that “humanitarian assistance is an entry point for effective engagement with the Taliban.”

European Commission President Ursula von der Leyen emphasized that aid would not be released until the Taliban met the European Union’s conditions, including the promotion, protection, and respect of human rights. U.S. Secretary of State Anthony Blinken similarly noted that the Biden administration is looking for ways to use foreign assistance to “successfully incentivize positive actions by the [Taliban] government.”

The logic here is simple: Foreign aid is a carrot. In exchange for foreign assistance, which the Taliban desperately need to prevent economic collapse and ensure their own political survival, donors expect they can extract political concessions.

The need for foreign assistance is likely to be a strong motivator in bringing the Taliban to the bargaining table.

However, international assistance isn’t the political lever many hope it will be, as according to research on foreign aid diplomacy, international intervention in fragile states, and state-building in Afghanistan conducted by Haley Swedlund, Romain Malejacq and Malte Lierl (Foreign Aid Won’t Moderate the Taliban—published in Foreign Policy Magazine on 27 October 2021)the ‘lever’ was unlikely to incentivize the Taliban to uphold human rights and political freedoms in the long run.

The authors believe, for aid to be an effective political lever on the Taliban, a number of (almost impossible) conditions have to be satisfied: Donors have to be willing to suspend aid to Afghanistan if their conditions aren’t met.

For foreign aid to produce political change, the conditions under which it was granted must be enforced.

That is, if the recipient violates the terms of agreement, donors must be willing to cut off aid. Research, however, tells that donors often fail to uphold political conditionality.

“In the case of Afghanistan, aid has continued to flow to the country despite massive and credible claims of corruption.

Following the Taliban takeover, it was merely a matter of days before the donor community began discussing how to unfreeze aid to Afghanistan.

In mid-October, the U.N. Development Program set up a trust fund to offset Afghanistan’s “economic implosion,” while the European Union pledged 1 billion euros in immediate humanitarian aid to the country. For its part, the U.S. government has released almost $64 million in humanitarian aid.

“There are real and pressing humanitarian reasons that prevent donors from withholding aid to Afghanistan.

So, if donors were not even willing to fully suspend aid when the Taliban took power, how can they credibly threaten to do so in the future? “To leverage aid for political concessions, Western donors need to be offering something no one else is. In an increasingly fragmented aid landscape, this just isn’t the case.

In addition to their discussions with Western donors, the Taliban are also courting international aid from donors that are less demanding of political moderation, such as Qatar, Turkey, China, Pakistan, and Russia.

“As long as the Taliban exert a modicum of political restraint, for example by avoiding the infamous displays of violence of the 1990s (such as public executions and the amputations of hands), and issue declarations that echo donors’ demands, donors can claim some success and argue that their demands are being met.

This would allow donors to stay in business with a Taliban regime that does little more than erect a Potemkin facade.” Indeed, as the international community decides on the relations it wishes to have with a Taliban-ruled Afghanistan, foreign aid will inevitably be part of the package.

However, it would be risky to assume that it can incentivize the Taliban to transition from a violent insurgent organization to an inclusive and legitimate government.

If the Taliban embark on a more pluralistic political path, it will likely be for reasons unrelated to aid.

Going forward, the Taliban are expected to face more societal pressure and resistance to their rule than in the 1990s. The Afghan population is now younger, more urban, more liberal, and more educated.

To legitimize their rule, the Taliban may be forced by citizens to provide security and protect people’s livelihoods, as well as guarantee a minimum of civil liberties to retain skilled workers and public servants.

To govern effectively and, ultimately, remain in power, the Taliban may also have to broaden their political base and include some of Afghanistan’s most prominent power brokers.

To what degree the Taliban are willing or able to go down this path remains an open question. However, it is unrealistic to assume that foreign aid diplomacy would be the deciding factor.

Meanwhile, after four long decades of war, getting the nation up and running as soon as possible is a pressing matter for all its neighbours. Hence an all-out diplomacy drive from Russia, China, Pakistan and Iran to get the ball rolling.

At the second meeting of foreign ministers of Afghanistan’s neighbours, held on October 27 in Tehran the heavyweights China and Russia, Iran and Pakistan joined hands with three Central Asia’s Tajikistan, Uzbekistan and Turkmenistan and called for an “inclusive government and respect for the will of the Afghan people.”

The joint statement once again revisited all the main themes: the necessity of a “broad-based political structure, with the participation of all ethno-political groups” in Afghanistan; the need for “non-interference in its internal affairs”; and an emphasis on “national sovereignty, political independence, unity and territorial integrity.”

And last but not least, the definitive red line: No support in any way, shape or form for any jihadi outfit.

The foreign ministers also re-emphasized what was already imprinted in the wide-ranging summit in Moscow: “Countries primarily responsible for the difficulties in Afghanistan should earnestly deliver on their commitment and provide Afghanistan with urgently needed economic, livelihood and humanitarian assistance to help realize a stable transition.”