LAHORE, Pakistan: The Chief Minister Punjab Sardar Usman Buzdar and the entire Cabinet members have announced to donate one month salary for the construction of Diamer-Bhasha and Mohmand Dams.

“I am glad to announce that I and all Provincial Ministers will donate one month salary for the majestic cause and a historical initiative of Prime Minister’s dam appeal,” Usman Buzdar said on Saturday in a twitter message.

“Water is life and our country is in dire need of it,” the Chief Minister added.

I am glad to announce that I and all Provincial Ministers will donate one month salary for the majestic cause and a historical initiative of Prime Minister’s dam appeal.

Water is life and our country is in dire need of it. #DamsForPakistan

Last evening in a televised address to the nation, Prime Minister Imran Khan made an impassioned appeal to all Pakistanis, particularly overseas diaspora to generously donate funds to help the Country build dams.

The prime minister said construction of a dam for Pakistan today was inevitable, saying the Country could be hit by a drought by the year 2025 if new dams were not constructed now.

After the prime minister’s appeal, the Founder and the Chief Executive Officer (CEO) of ARY Digital Network Salman Iqbal announced to contribute $100,000 to the fund established for construction of dams while the Chairman Bahria Town Malik Riaz Hussain also announced Rs 5 crore for the dams.

After the initiation of CJ and the PM’s appeal to Pakistanis to extend support to the govt for building dams. ARY announced a contribution of $100,000 to the fund. I request all Pakistanis to come forward ! We have to help our country as we owe everything to our motherland!!

Earlier this year as per the directives of the Chief Justice of the Supreme Court of Pakistan Justice Mian Saqib Nisar, a fund was established for the construction of Diamer Bhasha and Mohmand Dams.

The prime minister in his address announced to merge the Prime Minister’s Fund and the Chief Justice Fund for the Dams, and said Rs 1.8 billion had so far been collected in the Diamder-Basha and Mohmand Dam Fund. 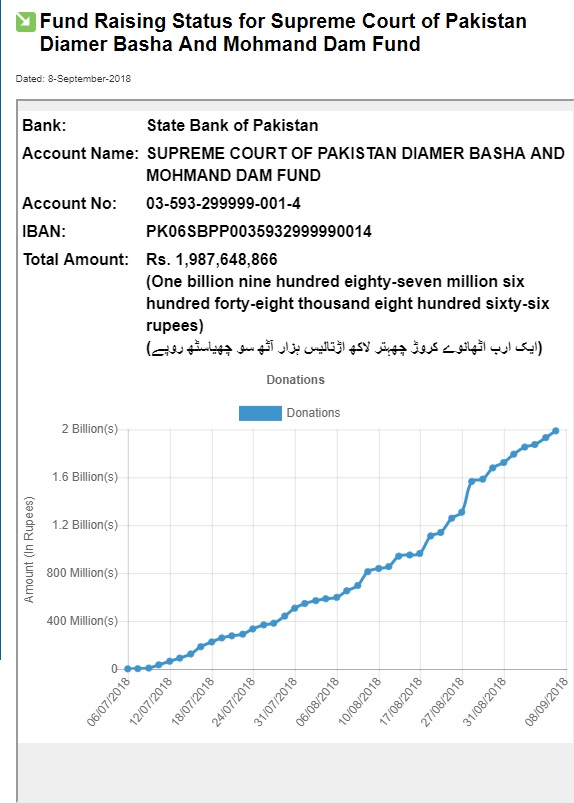 Mati
Mati-Ullah is the Online Editor For DND. He is the real man to handle the team around the Country and get news from them and provide to you instantly.
Share
Facebook
Twitter
Pinterest
WhatsApp
Previous articleChinese FM invites PM Imran Khan as guest of honour at China International Import Expo 2018
Next articleChina to support Pakistan in eliminating poverty: Wang Yi