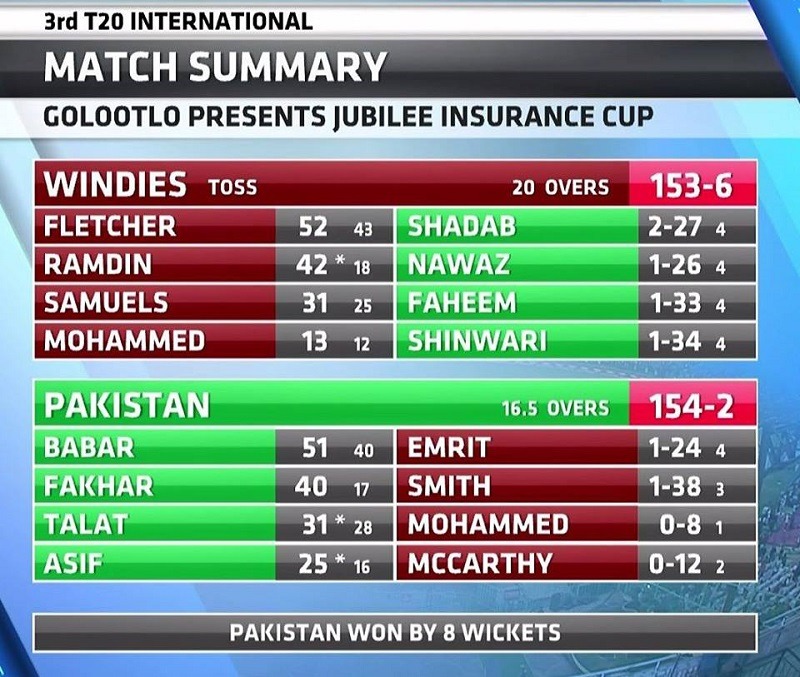 It was Pakistan’s sixth consecutive T20 series win since the World T20 held in India in 2016.

While batting first, Pakistani batsmen again played with ease and put 205 runs on the board after completion of 20 overs, which was their highest ever total in T20 Internationals.

Though Fakhar Zaman returned early after scoring just six runs but 119-run partnership between Babar Azam and Hussain Talat established an excellent platform for the team to set a massive total.

Hussain Talat scored his first T20 50 in his second International match, and then was caught by Jason Mohammed off Odean Smith on 63. Asif Ali again failed to prolong his presence at the crease and go out for just 14 runs.

On the other hand, Babar Azam continued to demonstrate his ability and class with the bat and remained not out till the end with 97 runs. Shaoib Malik also scored unbeaten 17 runs in his little innings which spanned just seven balls.

Pakistan finish with 205-3, their highest ever total, and become the first team in T20I history to score 180plus in 4 consecutive matches. #PakvWI

Pakistan’s 6th consecutive series win since the WT20 2016 plus a one-off victory in Manchester. Sarfraz Ahmed has never lost a T20I series as captain. #PakvWI

There was no difference either when West Indies batted as except Chadwick Walton, their all other batsmen crumbled under pressure. Chadwick Walton scored 40 runs with two sixes, and in the end, all visitors had returned to the dugout for 123 runs in 19.2 overs.

For Pakistan, Muhammad Amir took three wickets, Shadab Khan and Hussain Talat two each while Muhammad Nawaz and Hasan Ali one each.

Today it will be the last T20 between Pakistan and West Indies at National Stadium Karachi. Earlier in the first T20, Pakistan beat West Indies by 143 runs on April 1.

Mati
Mati-Ullah is the Online Editor For DND. He is the real man to handle the team around the Country and get news from them and provide to you instantly.
Share
Facebook
Twitter
Pinterest
WhatsApp
Previous articleBharat Bandh: Riots continue in India while BSF called in Punjab State
Next articleNasser Janjua for strengthening of Pak-Afghan cooperation