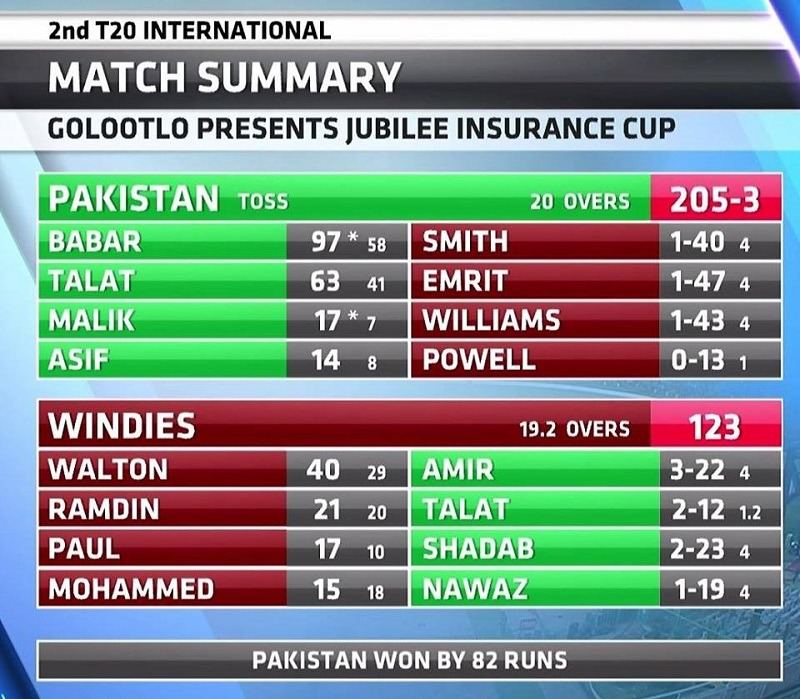 Pakistan embraced a thumping victory against West Indies in Karachi last night adding to their happiness over return of International Cricket to Pakistan.

Full-packed National Stadium produced almost a similar result as it did 10 years ago when Pakistan defeated Bangladesh by 102 runs at the same venue after making 203 for 5 while batting first. While on Sunday night, Pakistan yet again scored 203 for 5 and then restricted West Indies to just 60 runs, clinching a 143-run victory.

It was Pakistan’s biggest victory in T20 Internationals in terms of runs while second biggest in T20I history.

Pakistan win by 143 runs, their biggest victory in terms of runs in T20Is and second biggest in T20I history after 172 by SL vs Kenya.

Windies restricted to 60, which is their lost ever total in T20Is and also lowest by any team against Pakistan. #PakvWI

The Opener Fakhar Zaman provided Pakistan a flying start but lost his partner Babar Azam at 46 before losing his own wicket as well at 65. Fakhar Zaman scored 39 runs off 24 balls with one six.

However West Indies struggled from the very beginning and kept on losing wickets with little intervals. In the end, the whole team was bowled out for just 60.

Muhammad Nawaz, Muhammad Amir and Shaoib Malik picked up two wickets each whereas one wicket each was taken by Hasan Ali, Shadab Khan and Hussain Talat.

The hard-hitting batsman Asif Ali also made his International debut on Sunday but unfortunately failed to make an impact with the bat in his very first game for Pakistan.

Windies are not weak. They are jet lagged. We are strong and in form after the PSL. The next match should be more competitive. Come One, Come All tomorrow!

Today second match of three-match T20 series between Pakistan and West Indies will be held at National Stadium Karachi followed by the third T20 tomorrow at the same venue.

Mati
Mati-Ullah is the Online Editor For DND. He is the real man to handle the team around the Country and get news from them and provide to you instantly.
Share
Facebook
Twitter
Pinterest
WhatsApp
Previous articlePresident Mamnoon confers Nishan-i-Imtiaz (Military) upon Turkish Naval Chief
Next articleIndian rulers are terrorists, says Foreign Minister of Pakistan Kh Asif