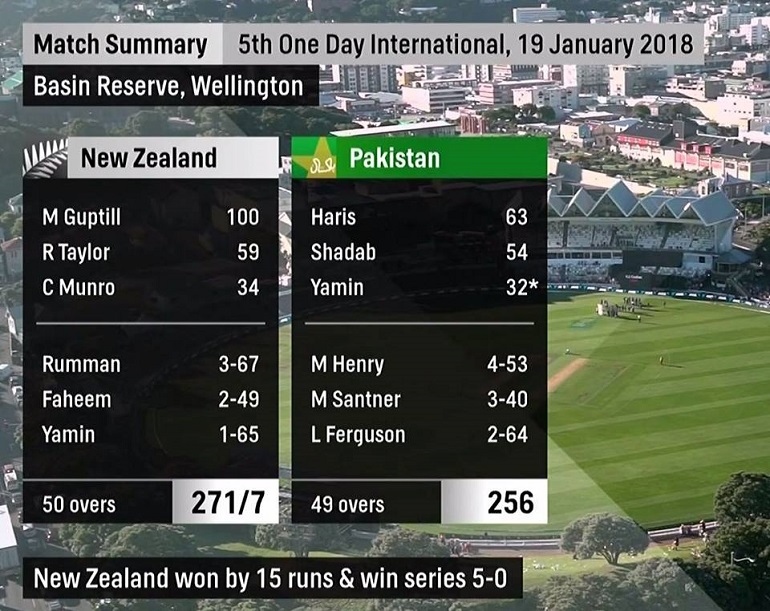 Following story was posted prior to the beginning of 5th ODI between Pakistan and New Zealand at Wellington on January 19, 2018.

Having witnessed Pakistan’s performance in New Zealand by now, it would be hard for someone to believe that this team won the ICC Champions Trophy 2017 just a few months ago, and that also in England. But that’s the reality as Pakistan kicked off its winning streak from the Champions Trophy and led it to nine consecutive wins but as they landed in New Zealand, not only it was over rather Pakistan suffered the series loss by 0-4.

If New Zealand clinch another victory in 5th ODI, the Host will complete the whitewash as well as will register its 11th consecutive win in ODIs against Pakistan.

Prior to that, Pakistan lost 14 ODIs in a raw against South Africa from January 10, 1995 to March 24, 2000 before Shoaib Akhtar’s brilliance halted the South African domination in Sharjah on March 28, 2000.

The fifth and last ODI between Pakistan and New Zealand will be played on Friday at Basin Reserve in Wellington, the same venue where the two teams met for the first ODI.

Pakistan could have bagged its first ODI victory over New Zealand after December 14, 2014 in 4th match at Hamilton on January 16, 2018 when they sent the former’s top five batsmen including Kane Williamson back to pavilion in 35 overs for 154 while defending 262 runs. But then Colin de Grandhomme really took over Pakistani bowling and snatched the victory with his blistering 74 runs off just 40 balls.

In the 4th ODI, Pakistan replaced Azhar Ali with Haris Sohail and also sent Faheem Ashraf up the order. Though promotion of Faheem Ashraf didn’t work but Haris Sohail justified his inclusion by scoring 50 runs and also picking up the crucial wicket of Kane Williamson.

Pakistan will again alter the squad for 5th ODI after Shaoib Malik suffered a head injury in 4th ODI, and was ruled out of the last 50-over match.

Mati
Mati-Ullah is the Online Editor For DND. He is the real man to handle the team around the Country and get news from them and provide to you instantly.
Share
Facebook
Twitter
Pinterest
WhatsApp
Previous articleFortnightly train to be restarted between Pakistan and Iran
Next articlePolitical leaders grieved over demise of Munnu Bhai