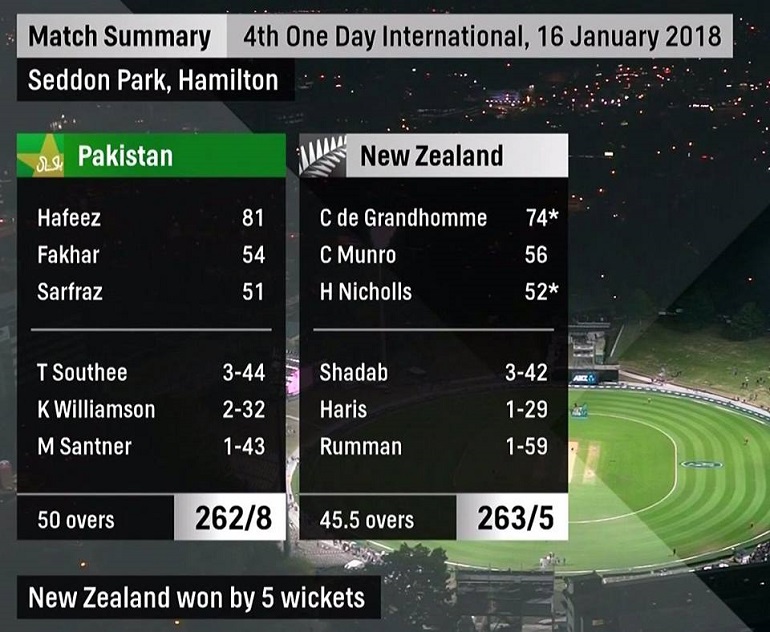 Following Story was posted prior to the beginning of 4th ODI between Pakistan and New Zealand at Seddon Park on January 16, 2018.

Though Pakistan has already lost the five-match ODI series against New Zealand but now it would be aiming at to perform well for its honour and pride in rest of the matches – one of them beginning at Seddon Park in Hamilton on Tuesday.

It will be the only Day/Night ODI match between Pakistan and New Zealand during the current tour; though two of the upcoming T20Is will also be played under floodlights.

Pakistan will certainly look for some replacements in the Playing XI for fourth ODI after its top and middle orders’ disappointing performance with the bat so far in the series. It is expected that Imam-ul-Haq may avail another chance to prove its worth as the Opener as replacement of out-of-form Azhar Ali while Haris Sohail may also join the middle order. Only two 50s were scored by Pakistani top six batsmen in previous three ODIs against New Zealand.

Led by Sarfraz Ahmed reached New Zealand for two limited overs series having won nine previous ODIs consecutively. But since then, nothing went in favour of Pakistan as green shirts have looked totally woeful especially with the bat.

Following two defeats in rain-affected ODIs, Pakistan was being believed to make a strong come back in third One Day International; however, it proved even more of a nightmare as while chasing a 258-run target, whole Pakistani team was bowled out for just 74 runs. At one stage, Pakistan had lost 8 wickets for just 32 runs but thanks to Muhammad Amir and Rumman Raees whose little contribution with the bat led the total score to reach 74 which was Pakistani’s third lowest score in ODIs.

So far it’s been a one-side series as New Zealand won all previous three ODIs quite comfortably. The last ODI will take place at Wellington on January 19 prior to the three-match T20 series.

Mati
Mati-Ullah is the Online Editor For DND. He is the real man to handle the team around the Country and get news from them and provide to you instantly.
Share
Facebook
Twitter
Pinterest
WhatsApp
Previous article15 school children stabbed in city of Perm in Russia
Next articleKPK Police threaten local journalist for highlighting their misdeeds