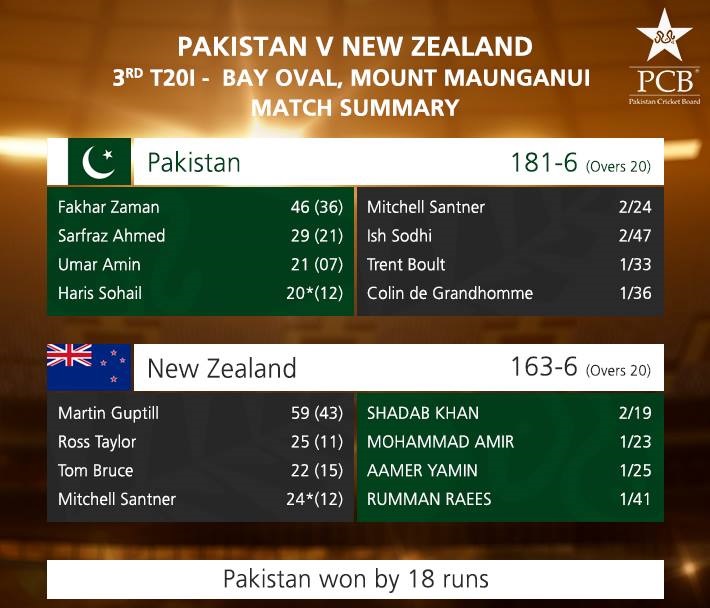 Following story was posted prior to the beginning of 3rd T20 between Pakistan and New Zealand at Mount Maunganui on January 28, 2018.

Pakistan are most likely to go with the same Side in the decisive match which led them to bag their first win in the New Zealand Tour at Auckland on January 25.

With a leveled Series, the third and last T20I between the two top-ranked Teams will begin at Bay Oval in Mount Maunganui on Sunday at 11:00 PST.

A victory in last T20 would bless Pakistan with the first ever T20 Series win in New Zealand. Prior to it, Pakistan played two three-match T20 Series in New Zealand in December 2010 and January 2016 but both of them ended in 1-2 for the Visitors.

However outside New Zealand, Pakistan sealed a T20 series win 2-0 in Dubai in November 2009 while another two-match series held at the Same Venue in December 2014 concluded in a draw.

It would be Pakistan’s first T20I at Mount Maunganui which has so far been luckiest for New Zealand because the Side played five T20Is there and won four of them while one game got washed out.

For the third T20, Pakistan don’t seem making any Changes but since Colin Munro and Glenn Phillips would not be available to New Zealand, Ross Taylor and Wicket-Keeper batsman Tom Blundell would make it to the Side. Tim Southee is also likely to return for the last match.

Earlier in Second T20, an all-around performance by Pakistan halted New Zealand’s winning streak and won the match by 48 runs.

While batting first, Pakistan scored 201 runs for 4 in 20 overs, registering a New Record in T20Is as for the first time in the shortest format of Cricket, each of the top four batsmen scored 40 plus in the same innings.

Mati
Mati-Ullah is the Online Editor For DND. He is the real man to handle the team around the Country and get news from them and provide to you instantly.
Share
Facebook
Twitter
Pinterest
WhatsApp
Previous article2018 general elections to be referendum for new Pakistan: Nawaz Sharif
Next articleNo military solution to Afghan conflict, reiterates Pakistani envoy