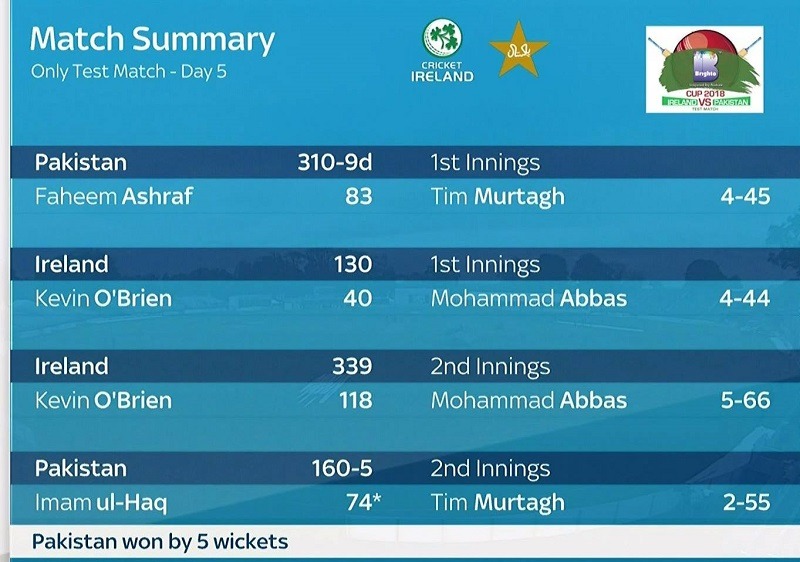 Following Story was posted prior to the beginning of Test Match between Pakistan and Ireland on May 11, 2018.

Today is an historic day for Ireland as they would play their first ever Test match at International level against Pakistan at Malahide Ground in Dublin on Friday.

Led by William Porterfield Ireland became the 11th Test Nation when they along with Afghanistan was elevated to Test status by the International Cricket Council (ICC) last year.

In a statement, Pakistan Captain Sarfraz Ahmed said that it is a privilege for him and his side to be part of a historic debut Test match for Ireland.

Not only it would be Ireland’s debut Test Match but Imam-ul-Haq and Faheem Ashraf would also feature in the historic match as debutants for Pakistan.

Though Ireland would have to face well experienced and competitive Pakistan in their first very Test match but unlike ODIs and T20Is, Pakistan haven’t been up to the mark in Test Cricket recently. Placed 7th in ICC Test Ranking, Pakistan suffered defeat in three out of their last four Test series.

Earlier in their warm-up game played from May 4-7 at Northampton, Pakistan defeated Northamptonshire by 9 wickets.

Pakistan would also play two Test Matches against England in Lords and Headingley from May 24 to June 5.

Mati
Mati-Ullah is the Online Editor For DND. He is the real man to handle the team around the Country and get news from them and provide to you instantly.
Share
Facebook
Twitter
Pinterest
WhatsApp
Previous articleOne policeman martyred, 13 injured in Bannu blast
Next articleHEC, Pink Ribbon announce winners of PINKtober Youth Awareness Programme 2017