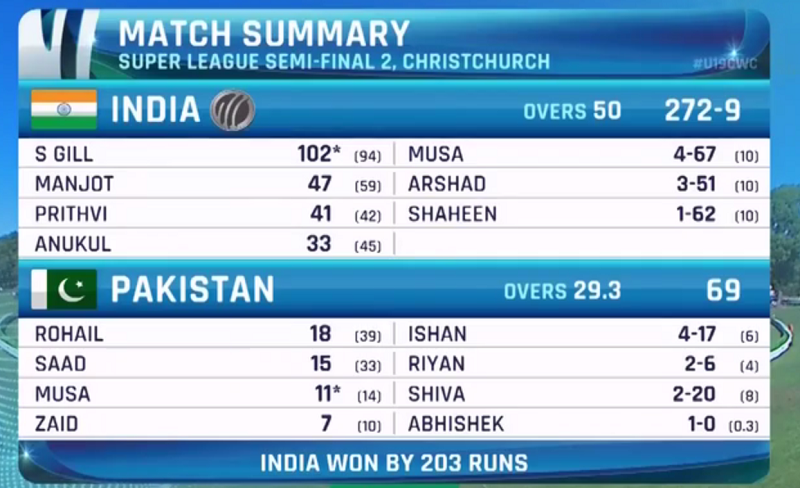 Following story was posted prior to the beginning of Second Semi-Final of ICC Under-19 Cricket World Cup between Pakistan and India at Christchurch on January 30, 2018.

The two South Asian arch-rivals Pakistan and India are poised to face each other at Hagley Oval in Christchurch on Tuesday in the Second Semi-Final of ICC Under-19 Cricket World Cup 2018.

Like India, Pakistan topped their respective group in the initial stage and reached the Semi-Finals for eighth time in U-19 World Cups by beating South Africa by three wickets in the Second Quarter-Final at Christchurch on January 24.

As far as Pakistan-India bilateral encounters are concerned in U-19 World Cups, the former have better record as they won five out of eight matches between the two Teams.

Prior to the upcoming Semi-Final at Christchurch, Pakistan and India also met in the Semi-Final of U-19 World Cup 2004 in Dhaka wherein the former emerged victorious.

Whosoever win the Second Semi-Final, will face Australian Under-19 Cricket Team at Mount Maunganui on February 3.

Earlier in the first Semi-Final of Under-19 Cricket World Cup 2018 played at Christchurch on January 29, Australia beat Afghanistan by six wickets.

Batting first, Afghanistan were all out for 181 runs in 48 overs with Left-Handed Wicket-Keeper Batsman Ikram Ali Khil remaining top scorer with 80. For Australia, Jonathan Merlo picked up four wickets.

In reply, Australia comfortably reached the target with six wickets still in hand. The Opener Jack Edwards scored 72 runs, and earned Man of the Match award.