In the 4th Match Tri-Series 2022, Pakistan and New Zealand will again face each other at Christchurch on Tuesday.

Currently, Pakistan top the points table of Tri-Series 2022 in New Zealand after two back to back wins against Bangladesh and the host.

In their first game on October 7, Pakistan thrashed Bangladesh by 21 runs while in the second match held on October 8, green shirts again clinched an easy victory over New Zealand by 6 wickets.

As of now, Pakistan have 4 points followed by New Zealand which have 2 points. Bangladesh have yet to open their account in the points table as they have lost both of their games.

Against Bangladesh, Devon Conway’s 70 runs off 51 balls guided New Zealand to reach a moderate target of 138 comfortably with 13 balls yet remaining. 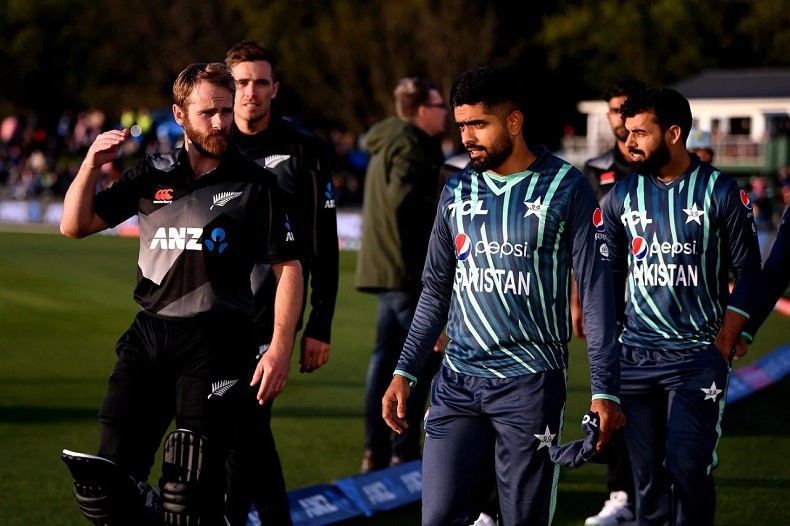 Prior to that, Pakistan secured their third consecutive win against New Zealand at Christchurch since December 22, 2020.

Batting first, New Zealand had posted 148 runs for 8 on the board.

Haris Rauf picked up 4 wickets conceding 28 runs in his 4 overs. Two wickets each were taken by Mohammad Wasim and Mohammad Nawaz.

New Zealand lost to Pakistan in previous match on October 8

In the pursuit of the target, Pakistan lost in-form Mohammad Rizwan and Shan Masood early but later Babar Azam along with Shadab Khan built a 62 runs partnership off 42 balls for the third wicket.

Shadab khan got out on 34 and the following batsman Mohammad Nawaz scored 16 runs.

In the end, Babar Azam remained unbeaten on 79 runs along with Haider Ali, steering their side to a 6-wicket win.