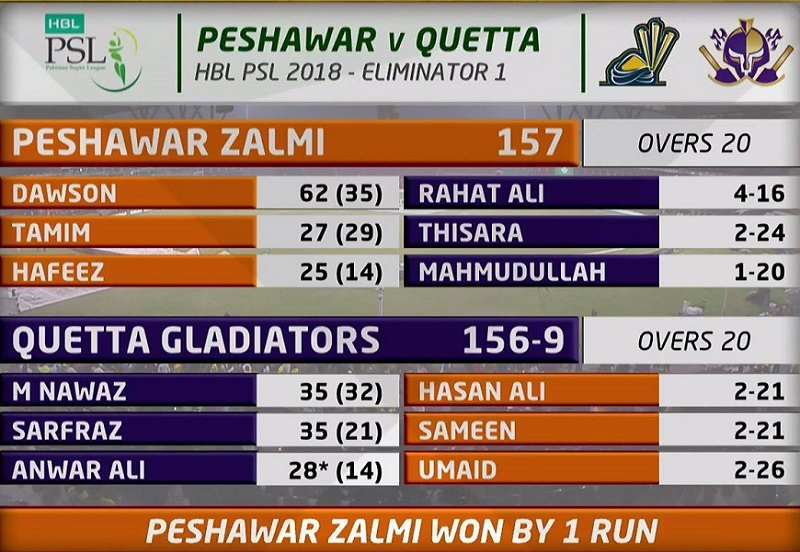 The stage is again set at Lahore’s Gaddafi Stadium to enthrall the Cricket lovers as Pakistan Super League (PSL) 2018’s first eliminator between Peshawar Zalmi and Quetta Gladiators will be underway on Tuesday evening at the Home of Pakistan Cricket.

The first eliminator of PSL third edition will begin at 07:00 pm as per Pakistan Standard Time (PSL) under tight security arrangements. Prior to it, all PSL 2018 matches took place in Dubai and Sharjah.

This is the second time, Gaddafi Stadium will host a PSL match as on March 5 last year, the venue – having a capacity of 27,000 spectators – hosted the Final of PSL 2017 between Peshawar Zalmi and Quetta Gladiators – same two teams which will face each other tonight.

Sarfraz Ahmed-led Quetta Gladiators were part of previous both PSL Finals but they didn’t succeed to go through them successfully whereas Peshawar Zalmi became Champions last year by beating the same rival by 58 runs.

Prior to todays’ T20, both Peshawar Zalmi and Quetta Gladiators enjoy equal share of triumphs as out of nine matches between them since 2016, both the teams won four games each while one ended without producing any result.

Whosoever win today’s match will meet Karachi Kings in PSL 2018 second eliminator at the same venue tomorrow (March 21) while the loser will be knocked out of the PSL 2018.

Mati
Mati-Ullah is the Online Editor For DND. He is the real man to handle the team around the Country and get news from them and provide to you instantly.
Share
Facebook
Twitter
Pinterest
WhatsApp
Previous articleNew Air Chief meets COAS
Next articleBest Zong internet 3G/4G packages for prepaid and postpaid customers