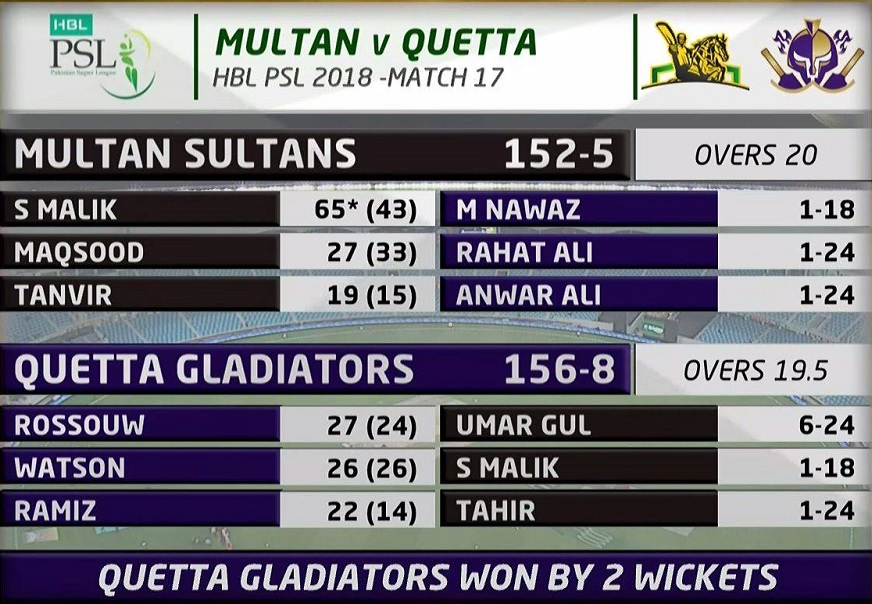 Except one loss against Islamabad United on February 25 and an abandoned match against Karachi Kings, Multan Sultans have throughout been dominant in Pakistan Super League after making their entry in the tournament as debutant.

Certainly being the hot favourite for PSL 2018 title along with Karachi Kings, Multan Sultans don’t seem short of playing the Final in Karachi on March 25, even if they fail to go through the last hurdle successfully.

PSL Season 3
Who do you wish to see on top?#DilSeJaanLagaDe#PSL3@thePSLt20@MultanSultans@lahoreqalandars@TeamQuetta@KarachiKingsARY@IsbUnited@PeshawarZalmi pic.twitter.com/NV2Ur5Z8Qs

But unlike their previous performances in PSL, Quetta Gladiators look off-colour this time, and just managed to clinch two victories in five T20s. In contrast to Multan Sultans’ 9 points, Quetta Gladiators just possess 4 points which are higher to only Lahore Qalandars; therefore, strong performances are inevitable for them in forthcoming matches.

But in pursuit of a huge total, Peshawar Zalmi just failed to accelerate the innings as per required run rate, and even Captain Muhammad Hafeez’s 56 runs remained insufficient. In the end, Peshawar Zalmi scored 164 for 8, falling short of 19 runs.

Mati
Mati-Ullah is the Online Editor For DND. He is the real man to handle the team around the Country and get news from them and provide to you instantly.
Share
Facebook
Twitter
Pinterest
WhatsApp
Previous articlePakistan accepts Indian proposals to de-escalate border tension
Next articleInternational Women Day: Asif pledges to redouble efforts to empower women