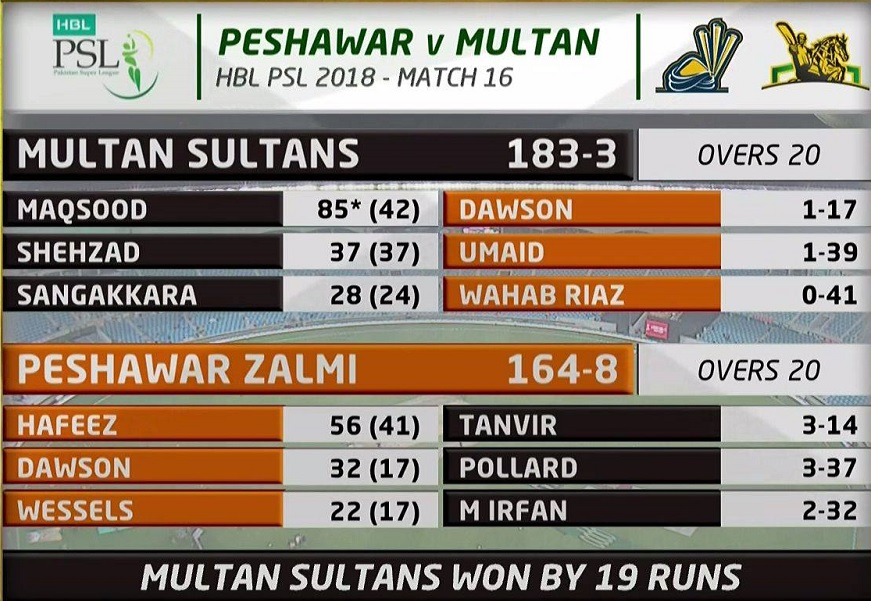 With 7 points, Multan Sultans are leading the HBL PSL 2018 Points Table by virtue of having better Net Run Rate (NRR) as Karachi Kings also stand at par with Multan Sultans in terms of points but NRR is making the difference.

Apart from topping the Points Table, Multan Sultans are also placed atop with regards to individuals’ performances in batting and bowling. Multan Sultans’ Kumar Sangakkara has so far scored the highest number of runs in PSL third edition registering 177 runs while Imran Tahir – another player from Multan Sultans – is the leading wicket taker with 10 wickets.

Peshawar Zalmi’s Captain Darren Sammy will again not be the part of today’s match after he suffered an injury in a match against Quetta Gladiators on March 1. Muhammad Hafeez will continue to lead the side in absence of Darren Sammy.

Mati
Mati-Ullah is the Online Editor For DND. He is the real man to handle the team around the Country and get news from them and provide to you instantly.
Share
Facebook
Twitter
Pinterest
WhatsApp
Previous articleEnvoy invites businessmen to exploit Pakistan’s economic potential
Next articleNATO nuclear weapons build-up at Russian borders accelerating second era of Cold War