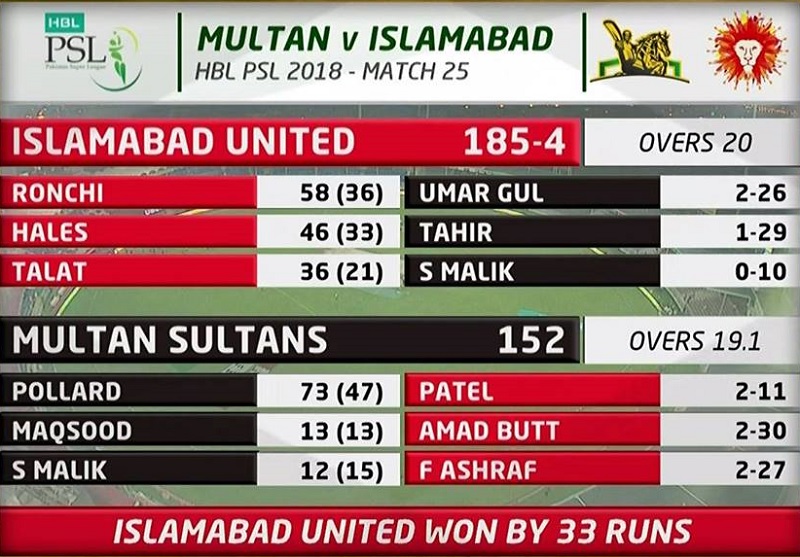 As Pakistan Super League (PSL) 2018 is approaching towards the end of its first round, all competing teams have further intensified their preparations to qualify for the Play-Offs with better positions in Points Table.

Multan Sultans vs Islamabad United
Who are you supporting?#DilSeJaanLagaDe#PSL3@thePSLt20@MultanSultans@IsbUnited pic.twitter.com/LZCrIrEEX1

Prior to today’s match, Islamabad United have secured four successive victories, and if they clinch the same result today, they will jump to top position in HBL PSL 2018 Standings.

Islamabad Unite have already beaten Multan Sultans in the competition by 5 wickets when they met in Dubai on February 25.

However the scenario has been vice versa for Multan Sultans which – unlike Islamabad United – emerged victorious in their initial matches but then lost three back-to-back T20s, letting themselves to fall into fourth position in Standings from the top. But given the current scenario, Multan Sultans can’t afford to throw away any further match; otherwise, their PSL 2018 journey will soon be over along with Lahore Qalandars.

So far 24 matches have been played in PSL 2018, and as per the Points Table, Quetta Gladiators are right at the top with 10 points followed by Islamabad United. Karachi Kings and Multan Sultans are at number 3 and 4 respectively with nine points each. Whereas Peshawar Zalmi are occupying the fifth position with six points just above the sixth-placed Lahore Qalandars.

As per the individuals’ performances, Quetta Gladiators’ Shane Watson is the highest scorer so far in PSL 2018 with 299 runs whereas Imran Tahir of Multan Sultans is at top of the Most Wickets column for his 12 wickets.

Mati
Mati-Ullah is the Online Editor For DND. He is the real man to handle the team around the Country and get news from them and provide to you instantly.
Share
Facebook
Twitter
Pinterest
WhatsApp
Previous articlePakistan-Kyrgyzstan Military Chiefs discuss defence cooperation
Next articleWho is new US Secretary of State as Tillerson is sacked and New CIA Chief Gina Haspel replaced Pompeo?