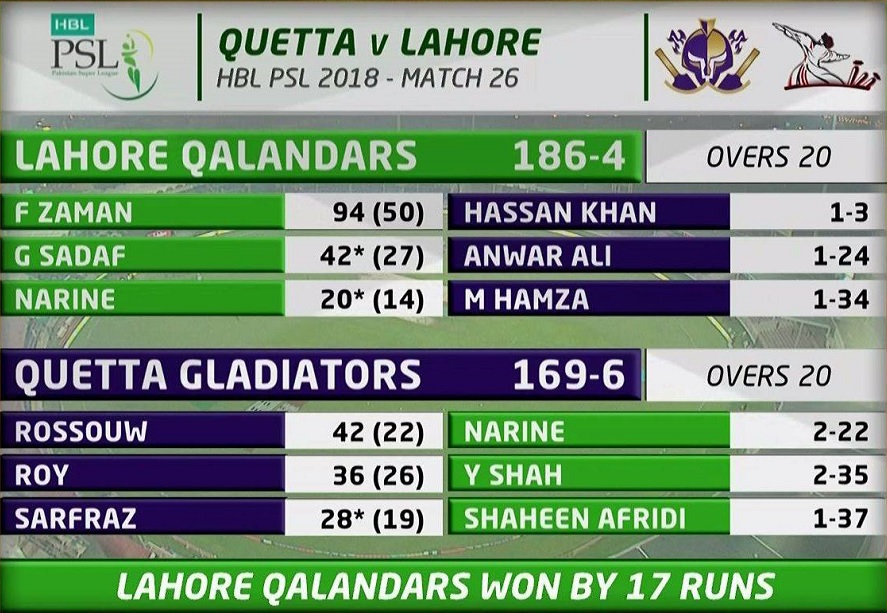 Having ensured their place in Play-Offs, Quetta Gladiators will face Lahore Qalandars in the 26th Match of HBL Pakistan Super League (PSL) 2018 at Sharjah Cricket Stadium on Wednesday night.

In terms of points, Quetta Gladiators and Islamabad United stand parallel to each other following eight T20s each side; however, owing to better net run rate, the latter is placed above the former.

On the other hand, Lahore Qalandars have already been knocked out of the PSL 2018. Out of eight matches, Lahore Qalandars suffered defeats in six games including the one against Quetta Gladiators on February 24 in Dubai.

In their most recent games, Lahore Qalandars secured two consecutive victories following an eight-match losing streak. Their last T20 against Karachi Kings on March 11 was considered to be among the most exciting and thrilling matches, T20 cricket has ever produced.

PSL Season 3
Who do you wish to see on top?#DilSeJaanLagaDe#PSL3@thePSLt20@MultanSultans@lahoreqalandars@TeamQuetta@KarachiKingsARY@IsbUnited@PeshawarZalmi pic.twitter.com/LdmSEXXDmO

Earlier last night, Multan Sultans lost their fourth match consecutively against Islamabad United, which brought them on the verge of being knocked out of the PSL third edition. However, it would be very much on how Karachi Kings and Peshawar Zalmi perform in rest of their matches.

Multan Sultans have completed their quota of T20s in the first Stage of PSL 2018, and now they would only been seen in the action if they manage to qualify for Play-Offs.

Tale of the Battle
Did you expect this result?#DilSeJaanLagaDe#PSL3@thePSLt20@MultanSultans@IsbUnited pic.twitter.com/b0dLNZiDWN

After today’s game, only four more matches would be played in PSL 2018 before the Play-Offs round begin on March 18 in which four top teams would be competing with each other.

Mati
Mati-Ullah is the Online Editor For DND. He is the real man to handle the team around the Country and get news from them and provide to you instantly.
Share
Facebook
Twitter
Pinterest
WhatsApp
Previous articlePPP concerned over appointment of Ali Jahangir Siddiqui as Pakistan’s envoy to US
Next articleRussia is committed to enhance cooperation with Pakistan in military, defense, intelligence and security sectors, says Mikhail POPOV