Hugely disappointed Lahore Qalandars’ fans have again casted their eyes at upcoming encounter against Islamabad United, hoping their team will turn the tide this time and add some points into its account in HBL PSL 2018 Points Table.

It would be the 18th Match of PSL 2018 which is just a few minutes away to begin at Dubai International Cricket Stadium.

Even though Lahore Qalandars didn’t end up well at all in PSL first two editions in 2016 and 2017 respectively but they haven’t been better either in PSL third edition. Even it has so far been Lahore Qalandars’ worst performance in PSL this year if all editions are taken into account. Out of five T20s, Lahore Qalandars have been part of, they won none.

But their next competitor Islamabad United – though currently placed just above Lahore Qalandars in Points Table – haven’t been that bad. Islamabad United suffered just two losses out of five games, and secured six points – equal of Peshawar Zalmi and Quetta Gladiators. Even if next T20 ends in either way, Islamabad United are likely to improve their place in PSL Standings. 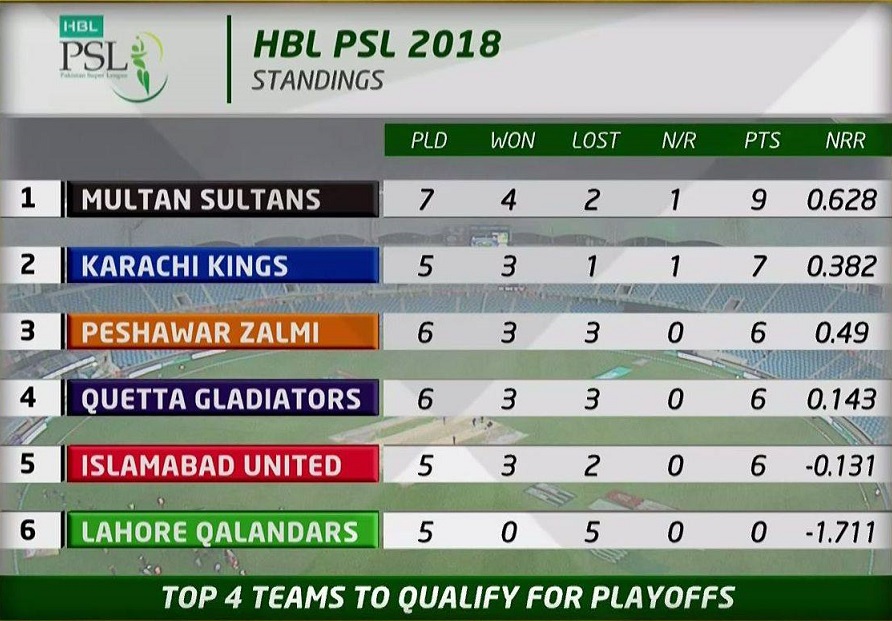 Today’s next T20 will take place against Karachi Kings and Quetta Gladiators – which just beaten top-ranked Multan Sultans last night by 2 wickets in another nail-biting finish.

Interestingly while chasing a target of 153 runs, none of Quetta Gladiators’ batsmen scored 30 runs individually – which itself was a unique T20 record as 153 by Quetta Gladiators was the highest target successfully chased in T20 history without any batsman scoring a 30.

Quetta Gladiators reached target in 19.5 overs for the loss of 8 wickets but Multan Sultans’ Umar Gul 6 wickets for 24 runs earned him Man of the Match award. His bowling figures was the third best in T20s in a losing cause after 6-22 by Aftab Ahmed and 6-19 by Adam Zampa.

Umar Gul also became the second bowler in T20 history after Saeed Ajmal to take fastest 200 wickets. He did in 147 matches while Saeed Ajmal reached the milestone in 139 T20s.

Mati
Mati-Ullah is the Online Editor For DND. He is the real man to handle the team around the Country and get news from them and provide to you instantly.
Share
Facebook
Twitter
Pinterest
WhatsApp
Previous article5 Best Features of Nokia 8 Sirocco
Next articlePakistan wants greater participation by Bosnia in IDEAS 2018