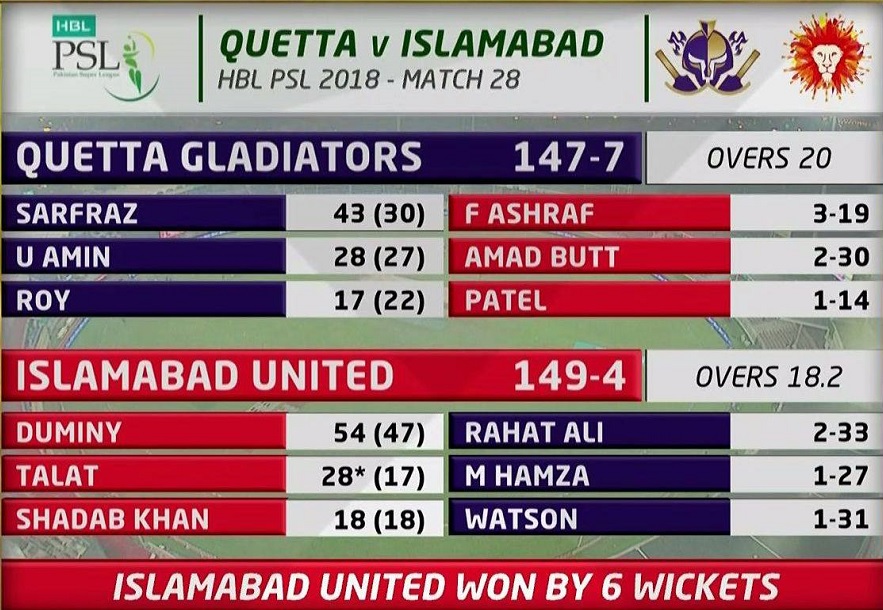 Peshawar Zalmi in a must-win game are facing Karachi Kings at Sharjah Cricket Stadium on Thursday afternoon as a loss will simply cause Darren Sammy’s men exit from Pakistan Super League (PSL) 2018 prior to Play-Offs.

With six points after eight T20, Peshawar Zalmi must win both of their two remaining matches to qualify for Play-Offs.

Even Karachi Kings are not safe either but if they are beaten in today’s T20, they would still have a chance to bag two points against Islamabad United on March 16 to ensure their place in Play-Offs.

Troubled Peshawar Zalmi have already lost to Karachi Kings in the competition by 5 wickets on February 25.

In today’s next T20, Quetta Gladiators will play their last game of PSL 2018 first stage against Islamabad United; however, the outcome of their match won’t affect anyone as much as both the teams have already qualified for the next stage.

Earlier last night, Lahore Qalandars bagged their third successive win in PSL third edition against Quetta Gladiators. But it has already been too late for Lahore Qalandars as even a fourth straight win on March 16 against Peshawar Zalmi won’t help them at all with regards to entering Play-Offs.

Tale of the Battle
Did you expect this result?#DilSeJaanLagaDe#LQvsQG#PSL3@thePSLt20@lahoreqalandars@TeamQuetta pic.twitter.com/tmAoNgRQfz

Mati
Mati-Ullah is the Online Editor For DND. He is the real man to handle the team around the Country and get news from them and provide to you instantly.
Share
Facebook
Twitter
Pinterest
WhatsApp
Previous articlePPP, PTI lock horn over issue of Opposition Leader in Senate
Next articlePresident Mamnoon hails Eisenhower Fellowships Programme