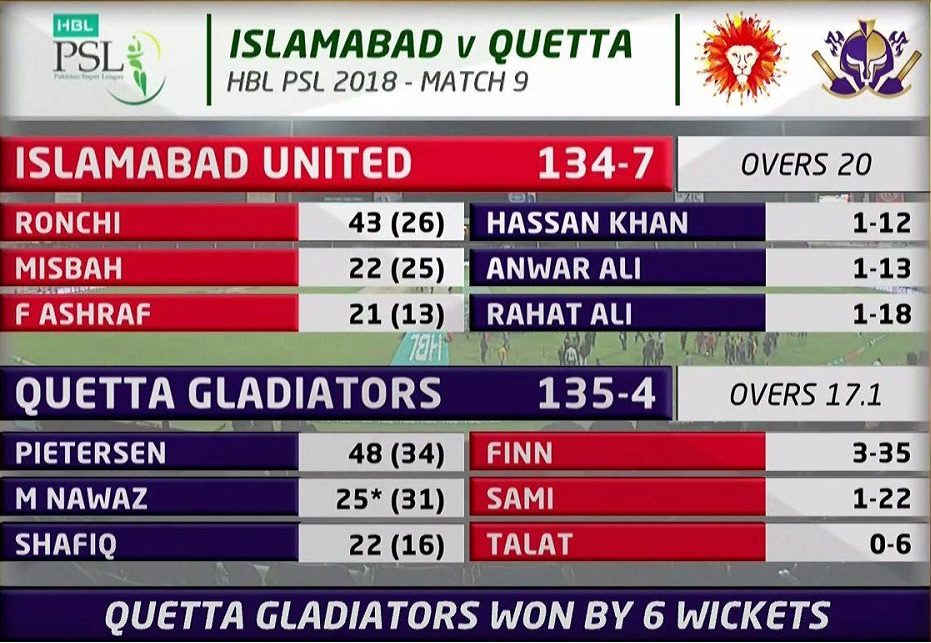 Both the teams have so far played two matches each in the tournament and equally grabbed same results. Though having been allocated 2 Points to both of them, Quetta Gladiators are placed above Islamabad United in the HBL PSL 2018 Points Table over better net run-rate (NRR).

Prior to today’s match in PSL third edition, Islamabad United lost to Peshawar Zalmi by 34 runs on February 24 but then a day after they beat Multan Sultans by 5 wickets.

While Quetta Gladiators also lost their first match in HBL 2018 against Karachi Kings by 19 runs on February 23 but they made a strong comeback and thrashed Lahore Qalandars in a one-sided game on February 24.

In Points Table, unbeaten Karachi Kings possess the top position with 6 points followed by Multan Sultans which have 4 points.

Likewise, Quetta Gladiators, Peshawar Zalmi and Islamabad United have been placed at third, fourth and fifth positons respectively; though they have 2 points each but NRR makes the difference among them. Lahore Qalandars are right at the bottom with no victory yet in the edition.

If individual performances are taken into account, Multan Sultans’ Kumar Sangakkara is leading the batting chart with 126 runs after three T20s whereas Multan Sultans’ Imran Tahir tops the bowlers after picking up 7 wickets.

Except Quetta Gladiators’ Jofra Archer – who makes his place in top five successful bowlers in HBL PSL 2018 – none of other players from Quetta Gladiators or Islamabad United has so far succeeded to appear either in top batsmen or bowlers lists.

Mati
Mati-Ullah is the Online Editor For DND. He is the real man to handle the team around the Country and get news from them and provide to you instantly.
Share
Facebook
Twitter
Pinterest
WhatsApp
Previous article
Suzuki, Toyota and Honda – most popular car brands and models sold in 2017
Next article
Imran Khan is afraid of going to public’s Court: Shahbaz Sharif
Share
Facebook
Twitter
Pinterest
WhatsApp