Islamabad, Pakistan: The unfortunate and insensitive media campaign against Pakistan Army launched after the unlucky helicopter crash in Baluchistan indicates that social media has polluted social norms and has damaged the social fabric of Pakistan.

The campaign is the ultimate result of circumstances in which the slur brigade of PTI had been allowed taunting, name-calling, and slurring state institutions in past without any check which has resulted from the unfortunate incident of a regretful social media campaign that has caused deep anguish and distress among Shuhada families and rank and file of the Armed Forces.

These were observations of participants of the Current Affairs show of state-run television PTV News “Sochna Hoga” on Saturday.

Experts were of the view while the whole nation stood with the Pakistan Army in this difficult time PTI slur bridge resorted to hurtful and derogatory comments on social media which is unacceptable and highly condemnable.

Lt. Gen. (retd) Raza Muhammad Khan expressed his deep concern over the derogatory comments about those who always sacrificed their lives for protecting their motherland.  He was of the view that there must be strict laws that could discourage people to harm state institutions. He was of the opinion that comments that appeared on social media against martyred officers and soldiers were not acceptable in any decent and normal society. He stated that the chopper crash took place when army officers were serving humanity trapped in wild floods and they were risking their lives to fly and land in flood-hit areas. “The entire nation is proud of those who sacrificed their lives and would remember them for all times to come,” commented Lt. Gen. (retd) Raza Muhammad Khan.

Shazia Anwer Cheema stated that she had been writing for a long that the slur bridge brought by PTI would definitely harm state institutions later or sooner. She stated that everybody knew who had been doing campaigns against state institutions after former prime minister Imran Khan was voted out but there was no systematic crackdown and large-scale arrests which is the reason that the cyber warfare wing of PTI did not stop making a mockery of state institutions.

She stated that upfront disobedience of conventional norms of public speaking promoted by PTI is highly polluted with slurs, name-calling, and sarcastic puns. Unapologetic conduct becomes the new normal. 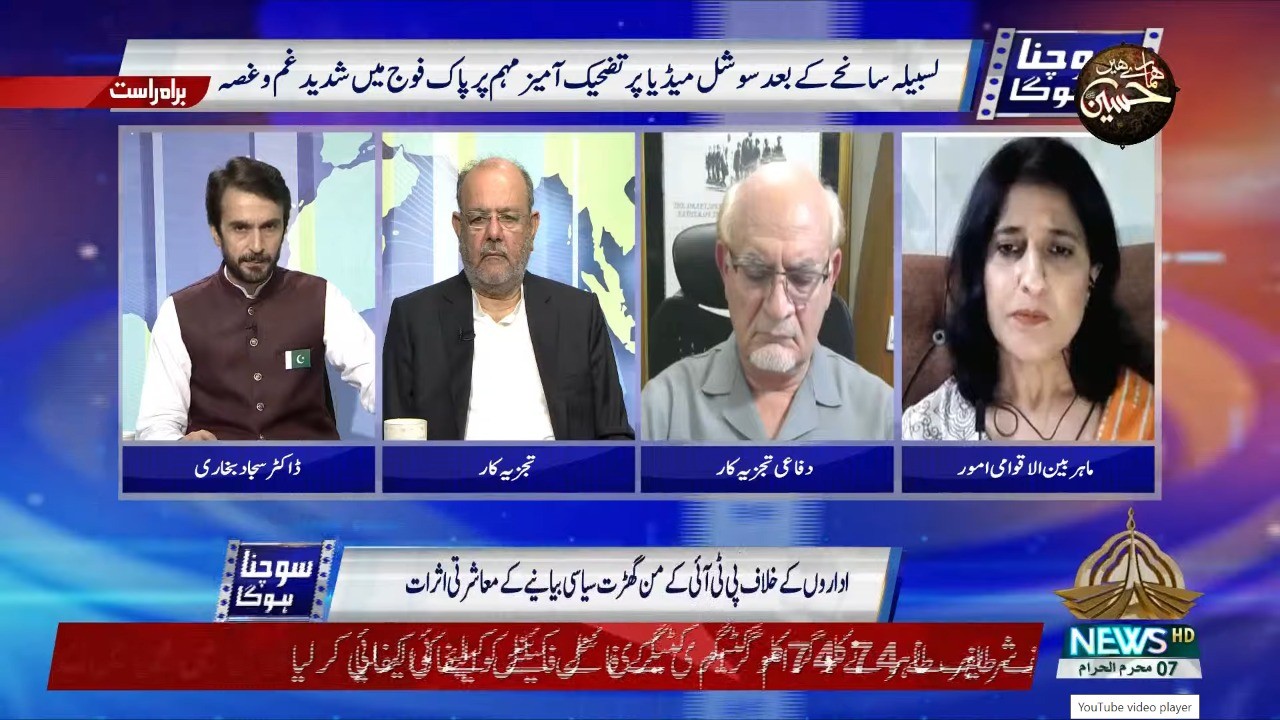 “To all my fears it did happen because the former regime of Imran Khan deliberately rejected everything which remotely seemed normal and sane and created a social media brigade which I call the “Slur Brigade” who ruthlessly attack anyone who slightly differs or demanded some sense. I don’t know how many among us actually register their presence because of their covert nature but I studied them deeply during the last three years. Artificial intelligence (AI), the filter bubbles, trends, hashtags, echo chambers mercilessly slaying everyone coming in their way,” explained Shazia Cheema.

She feared that the slur bridge is ready and enemies of Pakistan can fund this new kind of youth against the state and they would harm the country because PTI had already injected hate against state institutions among keyboard warriors of PTI. She said that there is a dire need for investment to tell youth how can they avoid becoming a victim of anti-state propaganda.

Senior journalist Azeem Ch was of the opinion that strict actions must be taken against a political party that is inciting people against state institutions and nurturing hate within society. He added that there are laws that restrict abusing state institutions like Army and the judiciary and there is no need for new laws more laws could be introduced but the most important issue is the implementation of laws.

All participants of the show lauded PTV for holding such an important discussion and appreciated anchor Dr. Sajjad Bokhari for conducting a serious thoughtful discussion.