Monitoring Desk: The Pakistan Tehreek-e-Insaf (PTI) government has planned to raise debt worth Rs5.87 trillion by offering sovereign securities to commercial banks over the next three months, according to the central bank.

According to news published by Express Tribune, the writer Salman Siddiqui indicates that the planned borrowing will be expensive in the wake of an uptick of 25 basis points in the benchmark policy rate of the central bank in September 2021 and will increase the debt burden on the nation. 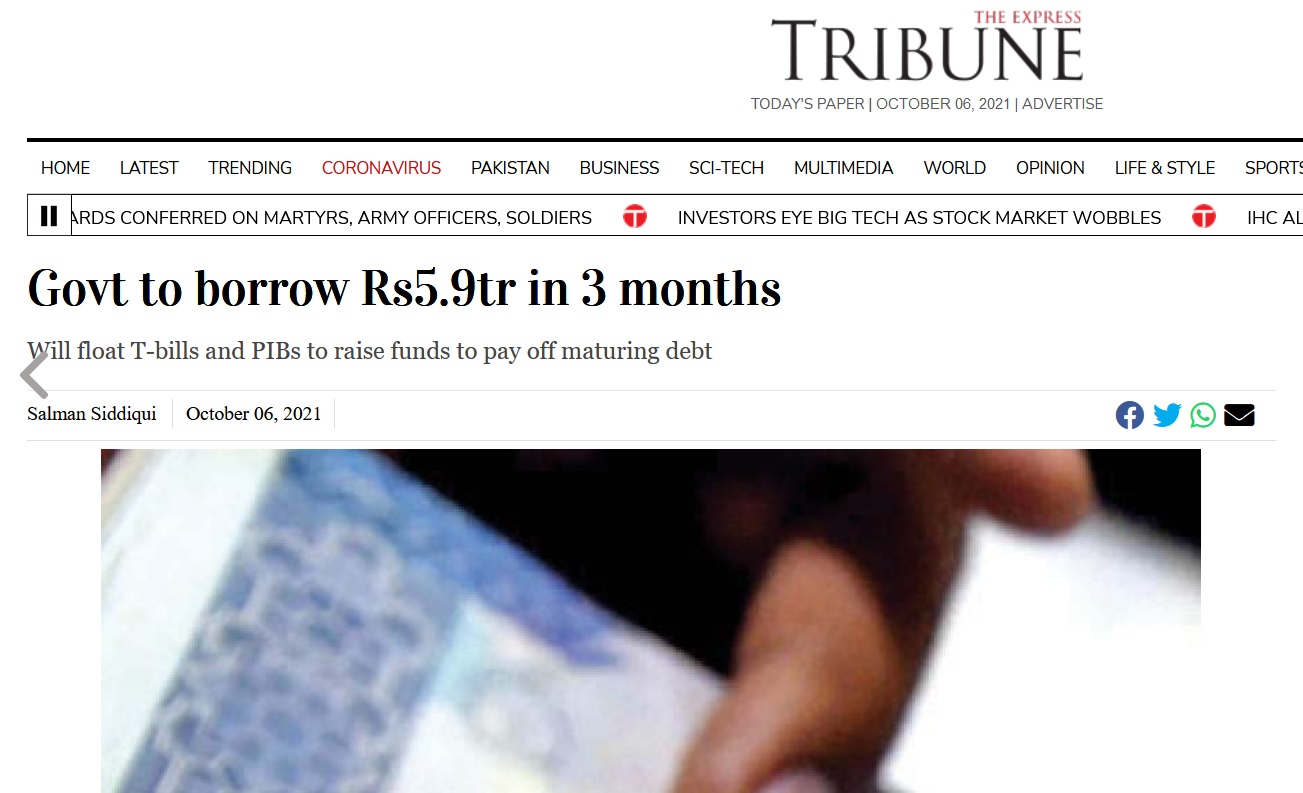 The funds to be raised through the issuance of treasury bills (T-bills) and Pakistan Investment Bonds (PIBs) would be partially utilised to pay off the maturing debt of Rs5.15 trillion. However, they will also add a net Rs720 billion to the public debt portfolio in the three months from October to December 2021.

The breakdown of the planned fresh borrowing suggests that the government will borrow Rs5.05 trillion by issuing three to 12-month T-bills against maturing papers of Rs5.1 trillion from October to December 2021.

Similarly, it will raise Rs300 billion by floating three to 30-year PIBs (at a fixed rate of return) against the maturity of previously issued bonds worth Rs55 billion during the three months.

It will borrow an additional Rs225 billion through the issuance of three to five-year PIBs at a floating (variable) interest rate against zero maturity as the floating rate bonds are relatively new.

The government will utilise the net new debt of Rs720 billion to finance its budget expenditure including development projects like roads and dams under the Public Sector Development Programme (PSDP).

It will also partially finance its defence requirements and issue funds to different ministries in the form of debt.

The government will finance its expenditures through the debt because tax revenue collection has remained low compared to the immediate requirement for funds for the ongoing fiscal year 2021-22.

The government has set the economic growth target at 4.8% for the current fiscal year. It has announced a budget of Rs8.5 trillion for the purpose.

The outlay is supposed to be financed through the targeted revenue collection of Rs5.82 trillion and borrowing worth Rs3.42 trillion.

The government has set the fiscal deficit target at Rs3.42 trillion (or 6.3% of GDP) for the current fiscal year against 7% last year.

It aims to collect 17.4% higher tax revenue through the Federal Board of Revenue (FBR) to Rs5.82 trillion in FY22 compared to Rs4.96 trillion in FY21.