ISLAMABAD, Pakistan: If the Pakistan Tehreek-e-Insaf (PTI) government kept General Sales Tax (GST) and Petroleum Levy (PL) the same as they were in April 2018 (under PML-N), it would have collected additional Rs 127.2 billion in GST and lost Rs 30.6 billion in PL collection, the Ministry of Finance said (oil prices).

However, the PTI government has foregone revenues of Rs 96.6 billion on petroleum products since it took over the realm in August 2018 to shield the citizens from rising oil prices.

It is pertinent to mention that the PTI-led federal government has increased prices of petroleum products for the month of April 2019. The prices of Petrol and High Speed Diesel (HSD) have been increased by Rs 6 per litre and prices of Kerosene Oil and Light Diesel Oil by Rs 3 per litre.

In a series of tweets on Monday, the Ministry of Finance said that the government has decided to ease impact of rising oil prices to the masses by reducing the PL on Motor Oil and HSD.

The ministry said that the International Brent Crude prices have increased 35% since December 2018, whereas during January to April 2019 the increase in local petrol prices is 9% and increase in diesel prices is 10%.

Consumers in Pakistan pay Rs 98.9 per litre for petrol whereas equivalent price to consumers in India is Rs 147 per litre. 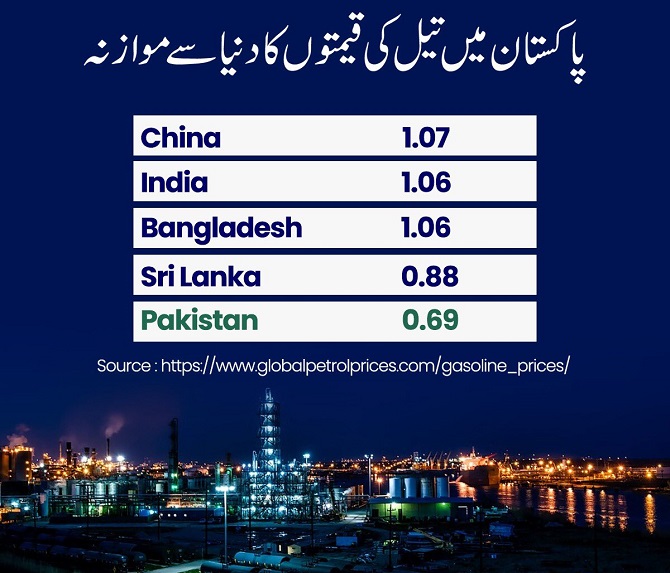 Rest of the cost is absorbed by the government through reduction in Petroleum Levy. The PL on petrol has been reduced to Rs 8.95 per litre from Rs 14 in January 2019.

Mati
Mati-Ullah is the Online Editor For DND. He is the real man to handle the team around the Country and get news from them and provide to you instantly.
Share
Facebook
Twitter
Pinterest
WhatsApp
Previous articleQatar Investment Authority delegation meets PM Imran Khan
Next articlePre-order HUAWEI P30 Series and Rewrite the Rules of Photography