ISLAMABAD, Pakistan: The Pakistan Tehreek-e-Insaf (PTI) has demanded to place Nawaz Sharif’s name on the Exit Control List (ECL) and also demanded him to be proceeded against under article 6 of the Constitution for his anti-state remarks.

The PTI has also demanded the resignations of the Punjab Chief Minister Shahbaz Sharif and Prime Minister Shahid Khaqan Abbasi for siding with the sacked premier.

In an important Press Conference in Islamabad on Monday, the Chairman PTI Imran Khan demanded that Nawaz Sharif violated his oath as the prime minister, and should be proceeded against under article 6 of the Constitution. He demanded that Nawaz Sharif should be put on the ECL as he might try to make a deal to escape the Country after giving such a controversial remark.

“He hurt the national interest of Pakistan by violating his oath as an ex-prime minister and should be proceeded against for treason”, he said. 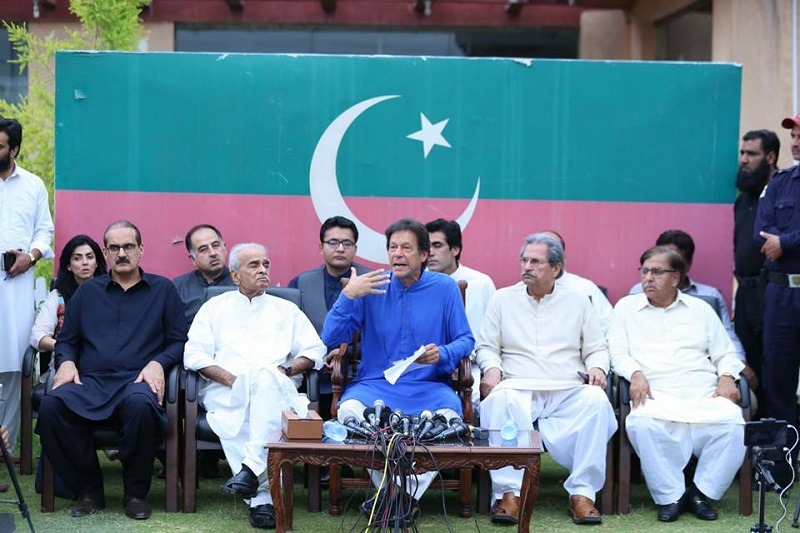 “Deposed PM is appealing to “international establishment” to save himself from going to jail”, he said adding that it’s evident that Dawn Leaks and recent statement of Nawaz Sharif is nothing but a vicious attempt to malign and denigrate armed forces of Pakistan.

“All Nawaz had to do was to prove where his money is coming from. He couldn’t so he started hurling attacks at institutions,” the Chairman PTI said.

The Chairman PTI made trenchant remarks on Pakistan Muslim League-Nawaz (PML-N) stating that an ideology is the cornerstone of a political party but unfortunately PML-N lacks ideology.

“Parties remove leaders when they prove to be a burden for them,” he said adding that PML-N could never dare to take action against Nawaz Sharif as it has turned into a syndicate of corruption by constantly safeguarding the ill-gotten wealth of House Sharif.

Imran Khan said that whole PML-N is a gang of crooks, this mafia has entangled the country in their vicious traps of corruption and nepotism. He asked National Accountability Bureau (NAB) to probe the details of businesses of Sharif family in India and put the facts before the nation.

The Chairman PTI further stated that he himself has criticized armed forces for the mistakes in the past.

“We need to understand the ongoing dynamics and should support our armed forces shoulder to shoulder,” he added stressing that an international conspiracy to isolate Pakistan is being hatched.

“We need to stay firm and learn from the fate of other Muslim countries which were deteriorated and have been pushed to the never ending political, social, economic and administrative crisis,” he said.

Mati
Mati-Ullah is the Online Editor For DND. He is the real man to handle the team around the Country and get news from them and provide to you instantly.
Share
Facebook
Twitter
Pinterest
WhatsApp
Previous articleInternational Conference of News Agencies (ICNA) hosted by APP concluded in Islamabad
Next articleLive Footage of Kundal Shahi Bridge Collapse in Neelum Valley