PTCL Stands for Pakistan and they never revoked the Sindhi Language

Yes, you heard it right. its time to put hoax news to rest as PTCL never revoked the Sindhi Language because it was never introduced in the first place.

Recently, a hashtag took Twitter by a storm which sounded like that PTCL has revoked a Sindhi language option from their helpline. However, it should be mentioned that the Sindhi language was never offered on PTCL helpline.

This incident clearly shows that how social media could be misleading at times. Digging deeper, it was revealed that PTCL is set to launch the Sindhi Language for the helpline soon enough since they already have English, Urdu and Pashto as a support language. It may be mentioned that PTCL has been working on the Sindhi language but couldn’t complete the project In given time due to the current pandemic situation.

Recently, a piece of fabricated news was propagated on social media about the deletion of the Sindh language from the PTCL System, sparking a strong condemnation by the Sindhi-Speaking Community against the Federation for resorting to such act.

Along with it, a campaign was also launched against the PTCL and the Federation on Twitter with hashtags #RestoreSindhiLanguageonPTCL and #ShameshameshameOnPtcl.

How long will you hate #Sindhi language, #Sindh and #Sindhis?

Why PTCL has imposed ban on Sindhi language? I strongly condemn the hatred against my mother tongue. #RestoreSindhiLanguageonPTCL pic.twitter.com/lk2mzgtup0

Even a letter from Jamil Ahmed Khan – a lawmaker from Malir affiliated with the ruling Pakistan Tehreek-e-Insaf (PTI) – also surfaced on social media in which he raised concerns with the Federal Minister for Information Technology and Telecommunication Syed Amin Ul Haque over the removal of the Sindh language from the PTCL System.

The lawmaker noted that the deletion of the Sindhi language has “caused great unrest among the public as it the language of Sindh Dharti and a huge population is Sindhi Speaking”, and urged its restoration.

In an official statement, the Pakistan Telecommunication Company Limited (PTCL) has clarified that the Sindhi language was never introduced on its Contact Center, brushing aside false propaganda on social media that the language has been deleted from the PTCL Helpline. The PTCL said that the language was under development and due to the COVID-19 situation, it will be rolled out as we resume normal operations.

“As a national company, we own and respect all languages and strive to provide the best services to our customers,” it said.

We would like to clarify that Sindhi language was not introduced on the PTCL helpline. The language was under development and due to the COVID-19 situation, it will be rolled out as we resume normal operations. 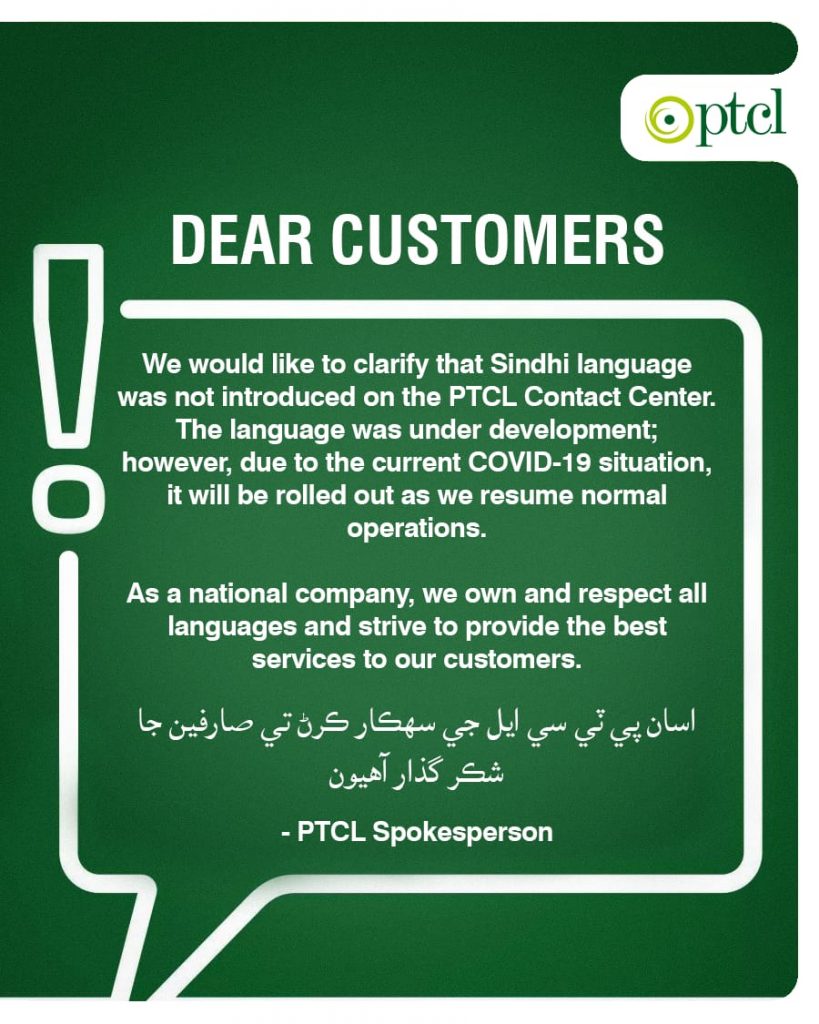 Asad Haroon
A netpreneur, blogger and above all; A Human :) Asad tweets from @aghaasadharoon and can also be approached on Google+
Share
Facebook
Twitter
Pinterest
WhatsApp
Previous articlePunjab develops app to indicate bed occupancy and ventilator availability
Next articlePresident Zelenskyy honors who laid their lives in World War II