MediaProtests in Lahore & Islamabad against suspension of 24 News License
Media
By Mati
July 6, 2020

LAHORE/ISLAMABAD, Pakistan: The Employees of 24 News on Monday blocked the Main Multan Road in Lahore and staged a protest sit-in against the suspension of Channel’s license by Pakistan Electronic Media Regulatory Authority (PEMRA).

On July 3, the PEMRA suspended the license of 24 News over its illegal transmission, arguing that the “Value TV” illegally using the name as “24 News” holds a license for entertainment content whereas it was persistently illegally and unlawfully airing News & current affairs in continues violation of PEMRA laws.

However, the 24 News Management termed it an attack on freedom of the press and accused PEMRA of unilaterally initiating the action without taking the Channel’s position into account.

Eventually, on Saturday, the 24 News Management decided to shut down the Channel.

In a bid to register their strong protest against PEMRA’s act, the employees of 24 News staged a protest sit-in on the Main Multan Road in Lahore and halted the traffic movement.

The employees said that they are holding a peaceful protest; however, neither Deputy Commissioner (DC) nor Assistant Commissioner (AC) has so far visited them and listened to their concerns. 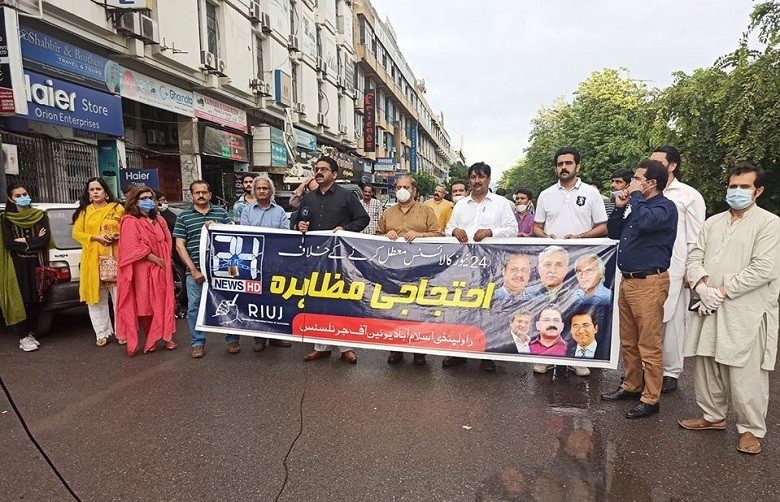 The participants of the protest staged by the RIUJ termed the initiative by PEMRA to suspend the license of 24 News a heinous plan to lay off thousands of its workers amid the COVID-19 pandemic.