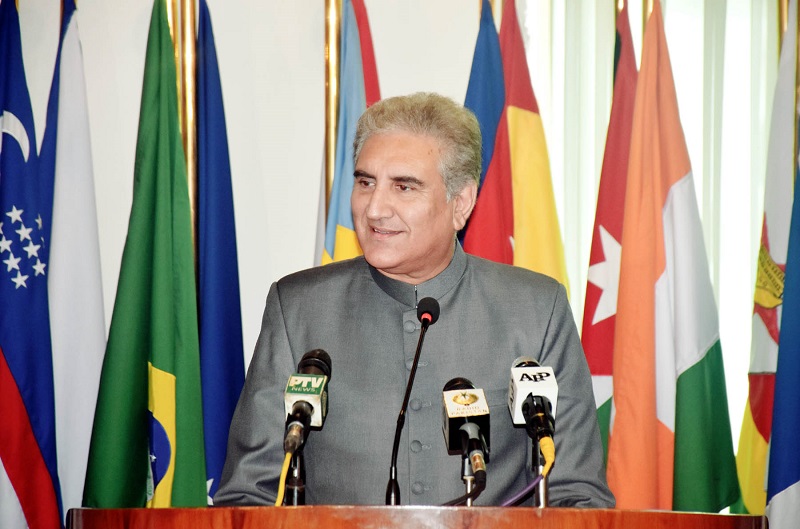 First of all, I would like to thank you for your presence at MOFA, today. It has been long, since I interacted with you on this forum. Let me tell you that the world has changed a lot during the past 7 years. There are new realignments that we need to understand. Pakistan is no longer the darling of the US and there are reasons behind this change. The PM was here today in MOFA. It was his desire to come here to have an overview of the challenges that Pakistan is facing. I, along with the Foreign Secretary presented our view point. We have given an overview of the Foreign Policy challenges. We will protect the interests of Pakistan effectively and for that inter-institutional consensus is important.

We need peace in our country and in our region. For economic development, we need stability and peace. In my view, the political and economic center of gravity has shifted eastwards. The world, which was once unipolar, is becoming multipolar. The liberal order, which was in place in post Second World War era, is under stress.

Rising islamophobia and anti-immigrant sentiments have left deep imprints on the politics of the west and Europe.

You are aware of the current state of Pakistan-India relations. The dialogue process is in limbo. We have made it clear that we are not shy of engagement. The Prime Minister, in his very first address said that if India will come one step forward, we will take two steps. I have received a congratulatory letter from the Indian External Affairs Minister, for which I am grateful. It takes two to tango. We have a positive standpoint. We are not and will not be on defensive.

Peace in Afghanistan is necessary for our stability. President Ashraf Ghani has positively signaled about the peace process in Afghanistan. We will see as to what role Pakistan can play in that regard.

US-Iran rift is not unknown to you. Iran is our immediate neighbor. We share a long border with them and want peaceful relations.

SAARC, in my view, is an important forum. Unfortunately, we have not been able to fully benefit from this regional forum.

Nobody can deny the importance of the US-Pak bilateral relations; however, there have been ups and downs in it. We will try our best to bring Pak-US relations to a higher level, for which we both need to understand the situation in Afghanistan, Pakistan needs to understand the US demands and the US has to cater for our needs. US Secretary of State, Mike Pompeo, is arriving in Islamabad on 5 September and I believe that his visit would be very useful to understand each other’s positions.

Regarding our relations with the EU, I know that we have a huge diaspora there. There are lots of trade and investment opportunities in EU, which we cannot ignore. Unfortunately, we did not benefit from the opportunities in EU, even after we got the GSP plus status for Pakistan.

Africa is a continent, to which we have not paid enough attention. If we want to increase our economic growth and develop our exports sector, we need to focus on the African continent.

We also need to work on FATF, as grey listing can have negative implications for Pakistan. Very soon, I will try to fix a meeting with Dr. Shamshad Akhtar to get details and background information on this issue.  I understand that a lot of work has been done by the interim setup in this regard.

We will try to assess the implications of the UN Security Council Resolution 1267 for Pakistan.

There is a huge Pakistan community of 9.2 million, living abroad.  They are very excited that soon they will get right to vote as per our desire and the Supreme Court’s decision. Pakistani Diaspora abroad can be helpful, as they not only send remittances to Pakistan, but can also project a positive image of Pakistan abroad. In this era of austerity, I will request them to share our burden.

Foreign Office, which is the first line of defence, needs to be strengthened. The Prime Minister has indicated that he wants to see the Foreign Office as the most viable of all Institutions. This is evident from the fact that this is the Ministry that he chose to visit.

In this era, image and narrative building is important, for which communication with media is the key. We will try to make the spokesperson’s office more effective. I know that Pakistani media is vibrant, like the media throughout the world.  The coordination between the South block of India and the Indian media has helped in projecting the image of India and narrative building.

On the instructions of PM and in view of the austerity drive, the Prime Minister has decided that he will not stay in five-star hotels, when he travels outside the country. He will prefer to stay in embassy residences, subject to availability. As you know, that the duration of stay, during the UNGA session is long, so we will adjust accordingly. Furthermore, the Foreign Minister alongwith very few, five or six other people can travel in first class however, I will not travel in first class and will instead do so in business class. We will not send unnecessary delegations abroad and will try to limit the composition of delegations sent abroad. No Minster or secretary will travel abroad without Prime Minister’s permission. However, if any visit is necessary and would help in furthering national interest, it would be facilitated and encouraged.

Lastly, I would like to brief you on the conversation between Secretary Pompeo and the Prime Minister.  The statement issued by the State Department was factually incorrect.  Hence, in response, we had to issue an immediate rebuttal.  However, the conversation between the Prime Minister and the Secretary of State was very good. He not only congratulated the Prime Minister, but also talked about constructive engagement and the desire to have a productive bilateral relationship. After this briefing, I will meet Ambassador David Hale, who is going to occupy the third senior most position in the State Department. He has had a firsthand account of the situation here and we look forward to his positive role in further promoting our bilateral relations.

Regarding the case of Commander Kulbushan Jadhav, yesterday you said that Pakistan will win the case. Are you satisfied with the way, the previous government has presented the case in ICJ? What will be your government’s policy? Secondly, for the past three years, the situation on LOC is tense. India has denied dialogue offers, which you mentioned in your earlier media interaction. How would you like to comment? (Rashida Sial – Ab Tak News)

I have not said that we will win the Commander Jadhav case, rather I had said that we will try our best to effectively present our case in ICJ. I cannot foretell anything about ICJ’s decision. Secondly, as far as the relations with India are concerned, I said that we don’t have any option other than dialogue as we are neighbors and nuclear powers. For achieving progress, we need to create an enabling environment.

There is always pressure on Pakistan to “do more”. When do you think Pakistan would be able to say, “enough is enough”. What are your comments on Jammu and Kashmir being the core dispute between Pakistan and India? (Khawaja Nayyar Iqbal – Daily Kashmir Post)

Everybody knows that Jammu and Kashmir dispute is the core issue between India and Pakistan and it will remain so.  This is linked to other issues, such as water, that we also need to address. In one of my meetings with Prime Minister, Manmohan Singh, in my previous tenure, I presented the case of water issues before him. I told him that our region is semi-arid and is slowly becoming water scarce. We need to sit together and resolve all these issues.

You have informed that the Foreign Ministers of US, Japan and Iran will be visiting Pakistan.  This is very welcoming. Despite the fact, that our Prime Minister has signaled positively to India, we have not received any response. How would you like to comment on this? Do you think that the Prime Minister may attend the upcoming UNGA session, owing to its importance? (Zahid Khan – ARY News)

The Prime Minister thinks that for the moment the internal challenges are more important and need immediate attention. People have a lot of expectations from our party, which has got more than one crore votes.

As you said that you will consult Dr. Shamshad on FATF. Two weeks ago, when your party was in the process of forming the government, the caretaker Foreign Minister had said that Pakistan should say good-bye to the US. What is your view point and what course will you follow?(Mazhar Iqbal – Public TV)

We will consider all options available to us, as far as Pak-US Relations are concerned. Minister of Finance will brief you shortly about the state of economy as we found it and on how to deal with the economic situation in the country, in the near future and then we will be able to decide about our future course of action.

First of all, I would like to congratulate you on your new position. Have you taken any decision about Pakistan’s participation in a conference on Afghanistan in Russia on 4 September, which will be attended by UK and USA. (Kausar Lodhi from Prime News)

As you said that you have suggested to the Prime Minister that we need to understand the US needs in Afghanistan. What would be your response, if the US wants to use Pakistan’s resources to its own ends?

Jammu and Kashmir dispute is the core issue between Pakistan and India? Where does it lie in PTI government’s priorities? Secondly, what is the policy of your government to take the overseas Pakistanis onboard? Thirdly, the Russian Foreign Ministry has recently issued a statement that ISIS is increasing its influence in Afghanistan and there is an increase in the flow of arms and ammunitions to ISIS. Afghanistan air space is in control of NATO and the US. Has this been discussed in the cabinet meeting or today’s meeting? (Tariq Mahmood – Hum TV)

There is a national consensus on the fact that Jammu and Kashmir dispute is outstanding and it can only be resolved as per the UN Security Council Resolutions.

In one sitting we cannot decide about important matters. We will slowly and gradually discuss all issues and will bring forth our policy.

In sheer violation of diplomatic decency, the State Department stands by their statement regarding Secretary of State’s conversation with our Prime Minister. What are your comments? (Syed Mohsin Raza – Daily Asaas Publications)

We are standing by our own stance that the statement issued by the State Department was factually incorrect.

Mati
Mati-Ullah is the Online Editor For DND. He is the real man to handle the team around the Country and get news from them and provide to you instantly.
Share
Facebook
Twitter
Pinterest
WhatsApp
Previous articleFawad Chaudhry announces two new PTV Channels
Next articleDr Amir Mohammad Khan Jogazai excuses to be Governor Balochistan