Presidential election in Pakistan to be held on September 4

ISLAMABAD, Pakistan: The presidential election will take place in Pakistan on September 4, 2018, as per the schedule issued by the Election Commission of Pakistan (ECP) on Thursday.

According to the schedule issued by the ECP, nomination papers can be filed to the presiding officers in Islamabad and the four provinces in the Election Commission on August 27.

The scrutiny of the nomination papers will be conducted on August 29 while candidature can be withdrawn by 1200 hours on August 30.

The list of validated candidates will be published the same day at 1:00 pm.

The voting for the election will be held in the National Assembly and the four provincial assemblies from 10:00 am to 4:00 pm on September 4. 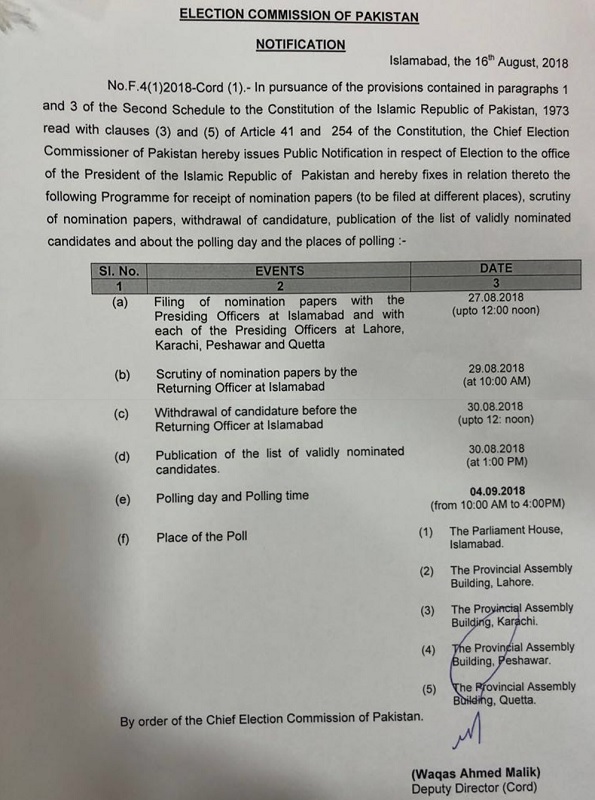 The tenure of the incumbent President Mamnoon Hussain – who assumed the Office of the President on September 9, 2013 – will be completed on September 8.

Mati
Mati-Ullah is the Online Editor For DND. He is the real man to handle the team around the Country and get news from them and provide to you instantly.
Share
Facebook
Twitter
Pinterest
WhatsApp
Previous articleShahbaz, Hamza have thin chances of victory, admits Mushahidullah
Next articlePTI’s Mehmood Khan elected CM KPK