ISLAMABAD, Pakistan: President Dr. Arif Alvi on Monday paid a visit to the Embassy of the United Arab Emirates (UAE) in Islamabad and offered heartfelt condolences to the royal family, the people and the government of UAE on the death of Sheikh Khalifa bin Zayed Al Nahyan as he was a true and sincere friend of Pakistan.

Speaking on the occasion, he said that the death of the former President of UAE was a great loss for both the Countries and he wanted to get the feelings of the Pakistani nation registered.

The president said that Pakistan shared the grief of the royal family and the people of the UAE. 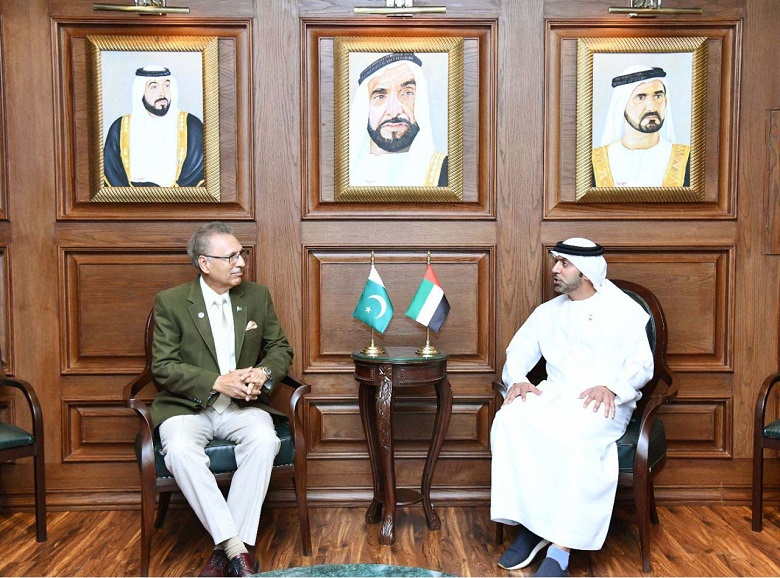 While paying rich tribute to the services rendered by the Late Sheikh Khalifa bin Zayed Al Nahyan for Pakistan, the president said that Pakistan-UAE ties under his leadership were further strengthened.

President Arif Alvi also reiterated the resolve to further improve and cement the friendship between the two Countries.

The Ambassador of UAE Hamad Obaid Ibrahim Salem Al-Zaabi thanked the President for the condolence visit and said that both Pakistan and UAE enjoyed strong relations.

The envoy also appreciated the contributions of the Pakistani community in the economic development of the UAE.

Mati
Mati-Ullah is the Online Editor For DND. He is the real man to handle the team around the Country and get news from them and provide to you instantly.
Share
Facebook
Twitter
Pinterest
WhatsApp
Previous articlePM Shahbaz Sharif calls Chinese Premier Li Keqiang
Next articleFM Bilawal visits UAE to offer condolences on passing away of Sheikh Khalifa