ISLAMABAD, Pakistan: The President of Jogye Order Ven. Wonhaeng spent a busy day in Islamabad by having meetings with President of Pakistan Dr Arif Alvi and Foreign Minister of Pakistan Shah Mahmood Qureshi here on Wednesday.

Jogye Order is the biggest denomination of Buddhism in the Republic of Korea. The Jogye school as a distinct entity emerged in the late 11th century when the monk Bojo Jinul, credited as the school’s founder, sought to combine Seon practices with the theological underpinnings of sutra-based Buddhist schools, including Korean Pure Land Buddhism.

The order now represents the largest segment of South Korea’s Buddhist population, administering about 1,900 active temples and more than 13,000 monastics and 7 million lay followers nationwide. Ven. Wonhaeng was elected in October 2018 to a four-year term in office. He is the 36th President of Jogye Order of Korean Buddhism

Talking to the delegation, the president highlighted that Pakistan is a cradle of many civilizations and the government is committed to promote tourism, especially, religious tourism, in which Buddhism has niche due to presence of a lot of Buddhist historic sites in Pakistan.

The visit of Buddhist delegation from South Korea would convey common message of peace, harmony and understanding among all religions, he added. 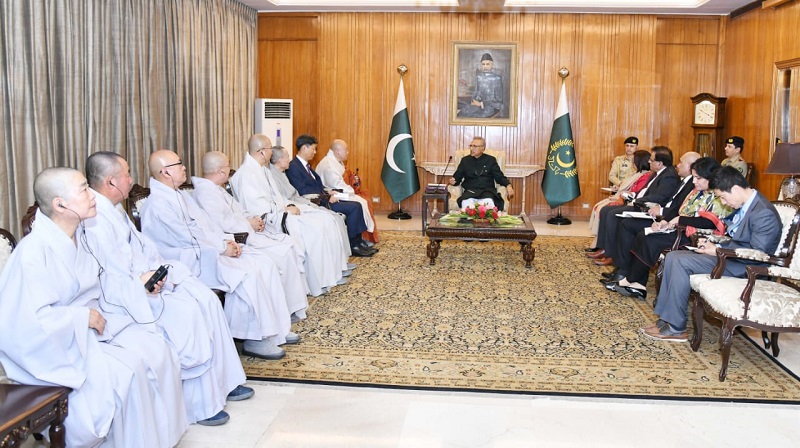 President Arif Alvi expressed hope that the visit would promote people to people contacts by highlighting the historic culture and religious linkages between our two countries. He said that Pakistan and Republic of Korea cultural and religious linkages went back to the Buddhist Gandhara civilization, to as early as the 4th century AD.

After historic visit of Britain’s Prince William and his wife Kate to Pakistan, this is second most important visit of any foreign dignitary to Pakistan.

Delegation will also discuss the means to preserve and restore Buddhists cultural heritage in Pakistan. Delegation is expected to have meetings with prominent Islamic scholars for inter-faith harmony.

The President of Jogye Order is the supreme spiritual leader of Buddhist Community in Korea and being the head of the biggest denomination of Buddhists, he is respected all over the world has strong linkage with ROK President.

Anwar Sajid, former head of Pakistan Tours Limited, a subsidiary of government of Pakistan when asked to comment, he stated that the visit can strongly promote religious tourism in Pakistan and it would be a breakthrough in Pakistani tourism.

He added that it would give fresh impetus to the existing cultural ties between Korea and Pakistan having common Buddhist heritage.

“It will open up stage for Buddhist Pilgrims from Korea and other parts of the world to Pakistan”, he added.

The Jogye Order is a school of Seon (Zen) Buddhism that traces its roots back 1,200 years to the Unified Silla (also known as the Later Silla) kingdom (668–935).

Elected a Member of the 12th Central Council of Jogye Order

Appointed Chair of Alumni Association of Chungang Sangha University, Elected a Member of the 13th Central Council of Jogye Order, Head of House of Sharing, Head of International Peace and Human Rights Center in Gyeonggi-do Province

Appointed President of Chungang Sangha University, Chair of Sanghawon Welfare Foundation, Director of BBS and Elected a Member of the 16th Central Council of Jogye Order

Elected the Chair of the 16th Central Council of Jogye Order

Mati
Mati-Ullah is the Online Editor For DND. He is the real man to handle the team around the Country and get news from them and provide to you instantly.
Share
Facebook
Twitter
Pinterest
WhatsApp
Previous articleInt’l Conference on “Kashmir Turmoil: Emerging Threats to Peace and the Role of the International Community” begins in Ankara
Next articleCentre for Social Justice & BNU organize Conference on “Right to Religious Freedom in Pakistan”