ISLAMABAD, Pakistan: President Mamnoon Hussain has said that Prince Karim Aga Khan is rendering invaluable services for global peace and stability, brotherhood, tolerance as well as for the welfare of humanity in different parts of the world including Pakistan.

While talking to Prince Karim Aga Khan who along with his daughter Princess Zahra Aga Khan and a delegation called on him at the Aiwan-e-Sadr in Islamabad, the president said that Aga Khan Foundation is rendering commendable services in the fields of education, health and for rural development in various parts of Pakistan.

President Mamnoon asked Prince Karim Aga Khan to extend the development activities of Aga Khan Development Network (AKDN) in other parts of the Country apart from Sindh and Northern Areas which was agreed to by the visiting dignitary. 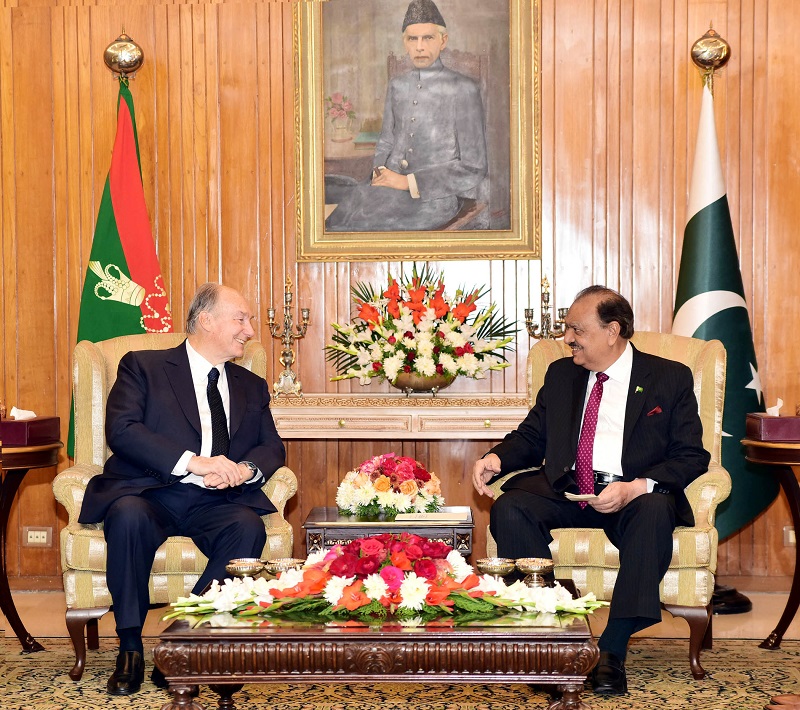 The president appreciated the services of Aga Khan Foundation during the 2005 earthquake and noted that his Grandfather Sir Sultan Muhammad Shah Aga Khan was a very close companion of the Founder of the Nation Quaid-e-Azam Muhammad Ali Jinnah who rendered valuable services in the freedom movement.

While thanking the president for being accorded warm welcome upon his arrival in Pakistan, Prince Karim Aga Khan said that he is thankful to the people and the Government of Pakistan for warm hospitality.

Prince Karim Aga Khan apprised the president about future development projects of Aga Khan Foundation. He further said that his institution has devised a comprehensive strategy to improve the standard of education in Pakistan adding that in this regard Aga Khan Medical University will be transformed into a full-fledged University in which more academic departments will be established in line with the current requirements.

Earlier Prince Karim Aga Khan was warmly received by the president upon his arrival at the Aiwan-e-Sadr. On this occasion, he was also given guard of honour.