FeaturedGovernment of Pakistan
By Mati
September 30, 2020

ISLAMABAD, Pakistan: President Dr. Arif Alvi has emphasized the importance of patience and perseverance in the intra-Afghan peace negotiations.

Talking to the Chairman of the High Council for National Reconciliation (HCNR) of Afghanistan Dr. Abdullah Abdullah who met him in Islamabad on Wednesday, the president also underlined the need for guarding against the ‘spoilers’, who do not wish to see the return of peace in the region.

Expressing satisfaction at the progress achieved in the Afghan peace process, the president conveyed his best wishes for the success of Dr. Abdullah Abdullah in his assignment as the Chairman of the HCNR.

The president emphasized that there is no military solution to the conflict in Afghanistan and a politically negotiated settlement is the only way forward. 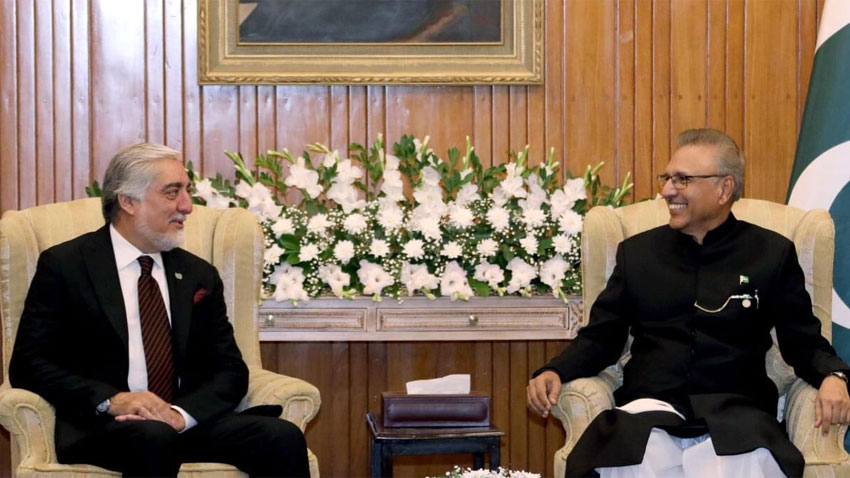 Dr. Arif Alvi noted that Pakistan’s contribution to the peace process has been appreciated by the International Community adding that the commencement of intra-Afghan negotiations in Doha is a watershed.

President Dr. Arif Alvi stressed that the Afghan leadership must seize this historic opportunity to work together constructively and secure an inclusive, broad-based, and comprehensive political settlement.

Reaffirming that Pakistan will stand-by the decisions made by the Afghan nation with regard to the future of Afghanistan, the president further underscored that peace in Afghanistan is essential for Pakistan and Afghanistan, as well as the region, to realize their economic potential.

The president emphasized that Pakistan had opened border crossing-points to facilitate Afghan transit trade despite the COVID-19 pandemic.

The two countries should work together to enhance trade, transit and people-to-people exchanges.

The president underlined that Pakistan has completed a number of development projects in Afghanistan including hospitals, schools, hostels, and road networks. He said that Pakistan would be willing to extend more opportunities for Afghan students in higher education.

Dr. Abdullah Abdullah is on his first official visit to Pakistan as the Chairman High Council for National Reconciliation.

During his three-day visit, he held meetings with leaders in Pakistan and interacted with the media.