ISLAMABAD, Pakistan: President Dr Arif Alvi has underscored the need for convening of joint commission meeting to further intensify dialogue for strengthening cooperation between Pakistan and Belgium in spheres like economics, trade, and tourism.

While talking to the Outgoing Ambassador of Belgium Frederic Verheyden who paid farewell call on him at Aiwan-e-Sadr in Islamabad on Monday, the president appreciated the cordial bilateral relations and said that Pakistan attaches highest value to its relations with Belgium both bilaterally and within the context of the European Union (EU). 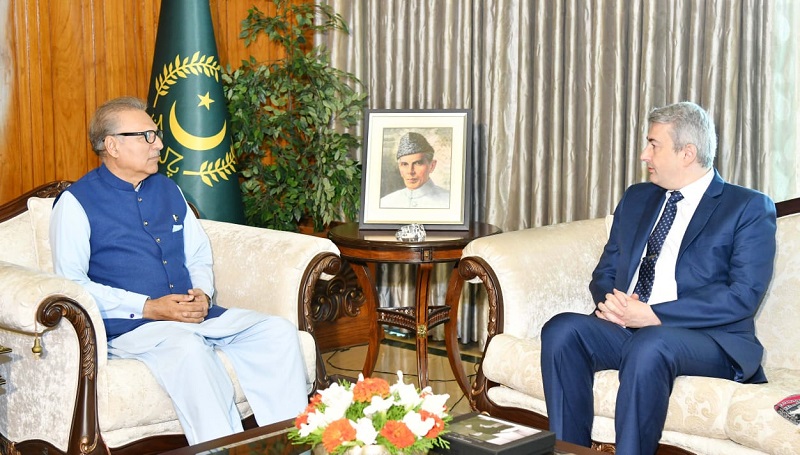 The president said that the current volume of trade between Pakistan and EU was not commensurate to its true potential and needed further boost.

Dr Arif Alvi emphasized that the investment-friendly policies of the Pakistani government would be fully utilized to enhance bilateral and multilateral economic collaboration.

Hoping that the ambassador had a pleasant stay in Pakistan, the president congratulated him on successful completion of his tenure in Pakistan and appreciated his efforts for enhancing the bilateral relations between the two Countries.

The Belgium ambassador thanked the government and people of Pakistan for their hospitality and making his stay in Pakistan pleasant. He also lauded the sacrifices by the people of Pakistan in curbing the menace of terrorism in the country.

In the end, President Arif Alvi wished the outgoing ambassador the best for his future endeavours and conveyed his regards to King Phillipe.

Mati
Mati-Ullah is the Online Editor For DND. He is the real man to handle the team around the Country and get news from them and provide to you instantly.
Share
Facebook
Twitter
Pinterest
WhatsApp
Previous articleIncome of Communications Ministry increased by 51%, Revenue rises to Rs 43 billion
Next articleRDA inaugurates welfare project “Dewar-E-Mehrbani”