Disintegration of former Soviet Union taught a lesson to Russians that diplomatic relations without bilateral trade and business with other nations are not only ineffective rather counter-productive.

Russian President Vladimir Putin who pulled newly born Federation of Russia out of grinding poverty believes that “Friendship cannot survive without mutual trade”.  Therefore, Putin is against Traditional or Classical Diplomacy that Soviet Union used to follow. Eurasian Economic Union is the classical model of diplomacy that is being promoted by Vladimir Putin.

One should understand that Russia without harming Chinese interests wants to establish its own trade corridors as far as South East Asia. Reconstruction of Amur Highway confirms that Putin is very much interested in linking Russia with South Asia and South East Asia through all possible trade routes. Amur Highway is a critical part of the Trans-Siberian Highway. With a length of 2,100 km, it is the longest segment connecting the paved roads of Siberia with those of the Russian Far East. The reconstruction of this road united the Russian Federal highways into a single system, stretching from Saint Petersburg to Vladivostok.

Putin’s interest in South North Corridor linking India with Russia through Iran, Afghanistan and Central Asia is natural as this route is operational.

During his recent visit to Tehran, Putin told reporters that Russia would invest resources into South North Corridor because this route is “viable”.

India recently sent 1.1 MT tones of wheat to Afghanistan through South North Corridor via Chabahar Port of Iran. India will use same route to send cargo loads to Europe via Iran, Azerbaijan and Turkey at one direction while to Afghanistan, Central Asia and Russia from another direction.

India and Iran are already busy in completing a new route that will run in Northern Afghanistan in the proximity of Central Asian borders.

New route will run from Heart to Leman, Bala Murghab, Cormach, Maymaneh, Andkhoy, Karamkal, Shaberghan, Aqchach and to Mazar-e- Sharif while Tajikistan-Afghanistan-Turkmenistan (TAT) Railway track will connect this route at Andkhoy. It may be mentioned that every country of Central Asia is already connected with Mazar-e- Sharif either through railway track or by all-weather roads. 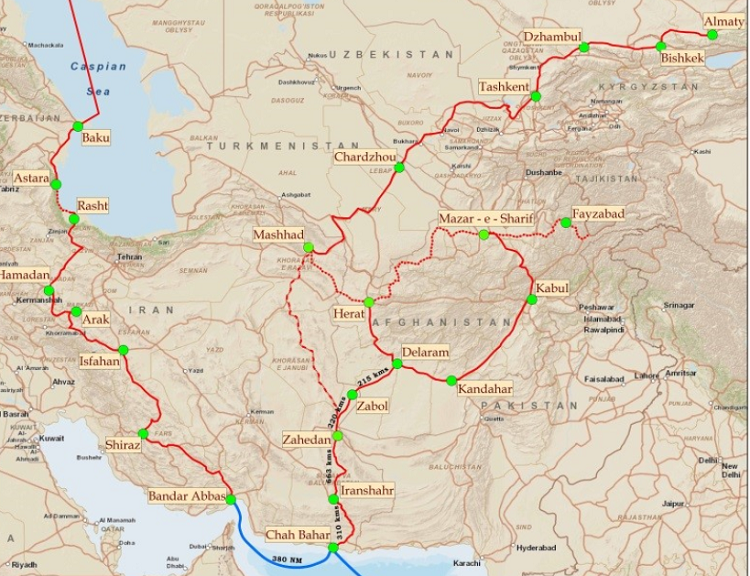 Central Asian states have already expressed their concerns over success of CPEC running through western parts of Afghanistan where civil war is going on since the last 35 years and where Taliban and Daish are strongly present.

It may be mentioned that CPEC route (if allows by Afghan government) will enter to Afghanistan from Pakistani Baluchistan and can link to Turkmenistan, Uzbekistan and Tajikistan with Gwadar Port. China is already linked with Uzbekistan by railway track.

South North Corridor through new road networking will enable Chabahar Port to connect with other central Asia states while bypassing old Soviet route that links Iran with Uzbekistan through Turkmenistan. New road network will link Iran with Uzbekistan and Tajikistan through Afghanistan, minimizing journey and cargo cost for Central Asian states of Kyrgyzstan, Tajikistan and Uzbekistan to reach Chabahar port for cargo trade.

Existing route that connects India via Chabahar Port with Central Asia starts from Kandla port of India to Chabahar port of Iran via sea and then moves on towards Central Asia through Iranshar, Zahedan and Mashhad. From Mashhad, it enters to Turkmenistan and crosses Chardzhor and then enters Uzbekistan at Bokhara. It runs from Bokhara to Tashkent and enters Kyrgyzstan via Dzhambul. This routes ends at Almty city of Kazakhstan. This route does not touch Tajikistan directly.

India had invested $960,000 for the construction of Delaram–Zaranj Highway inside Afghanistan. The length of this route is over 200km. It connects Delaram (border city of Afghanistan) to Zaranj (Capital of Nimruz province of Afghanistan). Nimruz is already linked with Sistan Province of Iran. Construction of this project started in 2005 and road was opened for trade in year 2009. Meanwhile, Iran built a highway from Chabahar to Afghan border city of Delaram, Nimruz.

Now India is linked with Afghanistan through South North Corridor via Iran which is linked with entire Central Asia through two different routes. Landlocked Afghanistan has direct access to seawaters at Chabahar Port through city of Delaram.

Disclaimer:
The views and opinions expressed in this article/Opinion/Comment are those of the author and do not necessarily reflect the official policy or position of the Dispatch News Desk (DND). Assumptions made within the analysis are not reflective of the position of Dispatch News Desk.