Politics can easily coexist with religion

“The relation between religion and politics continues to be an important theme in political philosophy, despite the emergent consensus (both among political theorists and in practical political contexts, such as the United Nations) on the right to freedom of conscience and on the need for some sort of separation for the state”.

The above-mentioned explanation comes from the political encyclopedia and I start my article by using this para because it would help readers to understand the classical interpretation of the relation between religion and politics.

Human history indicates religion mobilizes religious sensibilities among people in order to get their support to capture power; while politics uses intrigue, and diplomacy

Nonetheless, should the politicians decide what we can wear, and eat, what we should think, and what our meaning to the world?  My viewpoint is NO. We should decide what we eat, what we think and what we wear. Why do we think that girls wear hijab? I live in Denmark and I wear a hijab. So what does society say about the hijab here in Denmark? It’s not allowed to wear Niqab in Denmark, because it disturbs them a lot. I respect them a lot because they have their own opinion and some politicians think that thieves cover their faces and that wearing a Niqab is a security risk but it is allowed to wear a hijab. Nevertheless, there are few people who look a little strange. So there’s a bit of politics that doesn’t work with religion. But what is the difference between politics and religion?

Politics is influencing people to abide by secular or non-spiritual laws and customs. Religion is a set of laws and customs based on a belief.  In Denmark, the politicians and the parties both agree that we have freedom of religion therefore we need to understand what is the relation between religion and politics.

Human history indicates religion mobilizes religious sensibilities among people in order to get their support to capture power; while politics uses intrigue, and diplomacy, and makes attempt to win public opinion either democratically, if the system allows it, or usurps power with the help of army if the society is under-developed and backward. Religion and democratically elected government travel on different but parallel tracks. They are most successful and most effective when they protect and encourage one another. It doesn’t matter what you believe or what religion you follow; we are all equal. It doesn’t matter which party you support or whether you like the country’s parliament. Politics can easily coexist with religion. 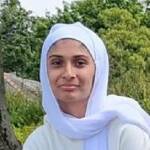 Note: The writer Tusbeeha Kamran Cheema is a student of STX in Griev Gymnasium Denmark.