Political Parties Felicitate Communist Party of China On Its Centenary

This virtual conference aimed at learning from the Chinese experience under the CPC leadership and highlighted new dimensions to further strengthen the bilateral relationship.

The strategy of CPC in addressing and alleviating poverty from the country, 10 years ahead of United Nation’s target was discussed in detail and appreciated.

A dedicated panel of nine speakers consisting of Parliamentarians and Ambassador of China spoke on the 100 years of CPC. 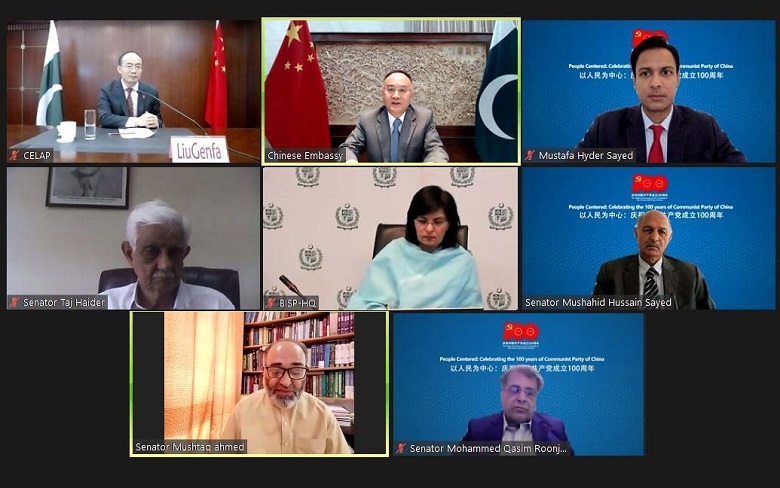 All the speakers were unanimous in highlighting the contributions of the CPC in transforming China under the banner of socialism.

They highlighted that China’s people-centric policies are the main reason for why the country has been able to bring out about 800 million out of poverty in a short span of four decades.

This was the first of its kind webinar engaging top tier leadership of Pakistan and China as the two countries also commemorate 70 years of bilateral relationship.

In his opening remarks, Mustafa Sayed highlighted the contributions of the CPC for the people of China and how the leadership has carried the same spirit of ‘serving the people’ till today.

He also quoted President Xi Jinping who at the onset of COVID-19 pandemic said that China will fight the pandemic as this is a people’s battle, and once the vaccine is developed, China would distribute it for ‘greater public good’.

Senator Mushahid Hussain, Chairman Senate Defence Committee, who also heads Chairman Pakistan-China Institute (PCI) read out a congratulatory letter signed by representatives of nine major Pakistani political parties to President Xi Jinping, who is also General Secretary of CPC, on the eve of CPC’s centenary. He said on China, there is complete unanimity of opinion in Pakistan.

Senator Mushahid Hussain highlighted the contribution of CPC Chairman Mao Zedong for the Chinese people, especially women as he liberated them from feudal bondage and gave them equality of opportunity as he famously said ‘women hold high the sky’. Moreover, he highlighted the role of CPC during the last 40 years for bringing 800 million people out of poverty, and contributing to peaceful rise of China.

In her keynote speech, Senator Sania Nishtar, Minister for Poverty Alleviation, highlighted the remarkable success of CPC in eradicating absolute poverty in the country. She highlighted that Pakistan is also keen to learn from the Chinese model as well.

She also highlighted China’s remarkable achievement in meeting poverty eradication targets set out in the United Nations 2030 Agenda for Sustainable Development, 10 years ahead of schedule.

She also said that CPEC has the potential to eradicate poverty as it has already created over 70,000 jobs, and more will be created once prioritized special economic zones become operational in the near future.

The Ambassador of China to Pakistan Nong Rong thanked Senator Hussain for reading the congratulatory letter from the representatives of major political parties. He said that since its founding CPC has worked for the rejuvenation of the Chinese people and has led the Chinese people to improve their livelihoods. CPC has led China through historic transformation and has brought socialism into new era. China has also supported Pakistan in the fight against the covid-19 pandemic and will continue to do so.

Moreover, he said that Pakistan and China have always supported each other’s core interests.

Senator Taj Haider highlighted the sacrifices and contributions of the CPC in bringing a revolutionary change in China. He said that CPC’s 100 years enshrine contributions for the people; as it promised better future, alleviated poverty, ended slavery, and modernized the country.

Senator Mushtaq Ahmed, Parliamentary Leader of Jamat-e-Islami said that the work on Western Route of CPEC is in full swing and is expected to be completed by November this year. He said this will bring ample opportunities for people of KPK.

He also added that the strategic location of Khyber Pakhtunkhwa province gives the CPEC’s Rashakai Special Economic Zone great potential for developing export-oriented industries targeting Central Asia and for the industries to meet the domestic market demand as well.

Moreover, he said that Gwadar port, which is the centerpiece of CPEC has already become operational and is expected to become a regional economic hub. He highlighted that Balochistan is a land of opportunities as it has a coastal belt and other resources and projects ongoing especially under CPEC. He said these have increased Balochistan’s prominence exponentially.

Liu Genfa Deputy Director General of the Department of International Exchange and Program Development of China Executive Leadership Academy Pudong (CELAP), based in Shanghai, said that CPC, by far, is the largest political party in the world, and its success lies in the support of Chinese people.

He spoke of the reforms and opening up of China since 1978 and how the country has advanced with socialism.

In his concluding remarks, Mustafa Hyder Sayed said that CPC’s legitimacy lies in its unprecedented economic growth and people-centric policies, and highlighted the concerted efforts spanning over 40 years to alleviate absolute poverty from the country.

He said public opinion polls show a 90% high level of satisfaction of the Chinese people with CPC performance and ability to deliver for issues that matter to them.

The webinar lasted for two hours and hosted over 50 participants who gained a lot of knowledge from the insightful conversations revolving around Pakistan-China relationship.