ISLAMABAD, Pakistan: The Polish Ambassador in Islamabad Piotr Opalinski has said that Poland’s trade with Pakistan has crossed half billion euro level and we look forward to further increase in near future as both Countries are working on that direction with complete mutual understanding.

In a meetup on bilateral relations hosted by the Chairperson Sindhu Welfare Trust Dr Afshan Malik and the Editor Pakistan in the World Tazeen Akhtar on November 25 at Islamabad Club, the ambassador said that trade is not the only bilateral bond between Pakistan and Poland but cooperation in the new fields stands important.

For example, he added, that both Countries are cooperating in Information Technology and one of the Polish IT Companies contributed in research how to optimize cellular networks in Pakistan in view of the future plans on 5G. Moreover, the identification chip in personalized page of Pakistani passports has also been prepared by Poland. 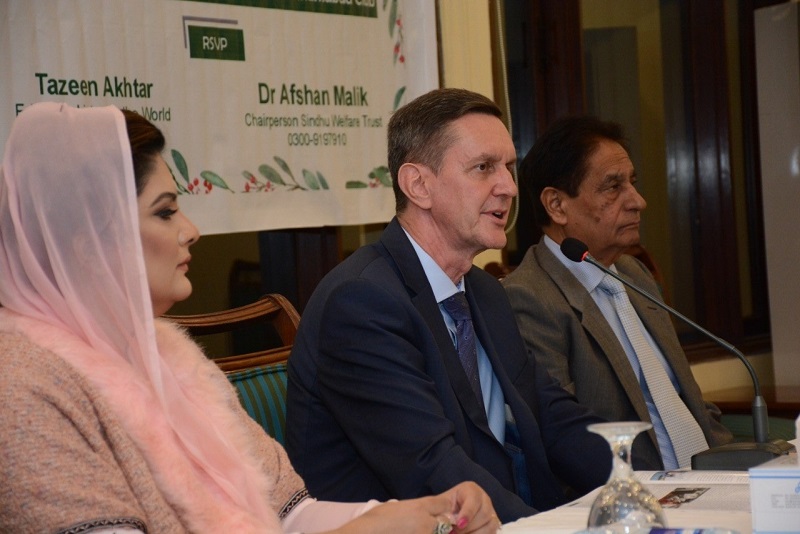 The Polish ambassador recalled the golden history of Pakistan-Poland bilateral relations. He said that Quaid-e-Azam invited Polish experts from different walks of life to visit newly established state of Pakistan. Polish pilots, aviation engineers, technicians stayed in Pakistan after the World War II. They were awarded honorary citizenship. They worked for Pakistan and many lived their life here. They were buried here and their graves are still safe in Rawalpindi and Karachi.

Piotr Opalinski said that Polish Oil and Gas Company (PGNiG) is operating successfully in exploration and exploitation of the natural gas for the local network in Sindh and is actually considering further investment in Pakistan.

Highlighting the great economic potential of both Countries, he pointed at the position Poland in the heart of Europe that made it a gateway to whole Continent toward all directions. Pakistani business community can exploit this location to reach into European markets. As the member of European Union, Poland supports Pakistan to secure the European GSP Plus program, to grant preferential treatment to Pakistani exports.

The ambassador said that Poland is a member of Schengen Zone that has a common regime of visa. One can travel to Poland as well with visa of any Schengen Country. Business community is welcome to our Country without any difficulty in getting visa.

Regarding education, the ambassador said that Poland offers quality education on relatively less fee than other European countries. The other attraction for Pakistani students is that education in our country is English medium.

Here it is worth mentioning as it was noted in the event that the Ambassador can speak and understand Urdu. Moreover he has a good taste of Urdu literature and he has read Urdu poets including Allama Iqbal. Therefore he shared with the participants that there is Pakistan chair at Krakow Jagiellonian University. Urdu, Punjabi and Pushto are also being taught at Krakow and Warsaw Universities.

Ambassador Piotr Opalinski appreciated Pakistani students’ activities in Poland. He said the students brought cricket to his country. They established a team with the name Warsaw Kings and won prizes. Thus they brought fame to the capital.

Piotr Opalinski revealed that Poland is calling back its citizen living and working abroad. He said that Poland is the fastest growing economy in Europe. We need our Diaspora to return and play their role in the development of their own country as they have played in other countries. He said Poland has issued more than a million visas to other Eastern European citizens last year that speaks a lot about its economic and tourism potential. Further he said that Pakistanis mostly travel to UK, France for holidays. We invite them to visit our country and explore the new and unseen locations that would certainly fascinate them.

The ambassador said that film industry is also instrumental in promoting tourism. For instance, as “Teefa in Trouble” was picturized on Polish locations, it was nice experience that resulted in many new tourists deciding to enjoy their time in our country because they were impressed by the locations screened in the film.

Ambassador Piotr A Opalinski said that Polish people are exploring Pakistan as well and that in their unique way. Our climbers visit Pakistan to surmount the highest peaks not in summer but winter season. He said that in Pakistan we feel at home.

President English Speaking Union Islamabad Khalid Malik and the Chairperson COPAIR Amna Malik were prominent among the participants in the meetup.

Representatives of civil society, business community and media were present in the event who asked different questions as well that the ambassador replied to their knowledge and satisfaction.

Mati
Mati-Ullah is the Online Editor For DND. He is the real man to handle the team around the Country and get news from them and provide to you instantly.
Share
Facebook
Twitter
Pinterest
WhatsApp
Previous articleDr Zafar Mirza Inaugurates upgraded Maternity Care Hospital Aabpara
Next articleMajor reward to Overseas Pakistanis proposed