Monitoring Desk: “PMLN always says that Imran Khan is Ladla (blessed and pampered) of someone because he is beyond the law of the land and he has never been arrested, jailed, or disqualified. If these are criteria of being a Ladla of invisible powers, then PMLN could also find such Ladlas in its cadre and ranks who have never been arrested, jailed, and disqualified even living in former and sitting kitchen cabinets. PMLN also has a list of “fortunate” having strong stars like Imran Khan who had been “Untouched” during the worst kind of political victimization that started around 2014 against PMLN”.

This was observed by in an article titled “Unlucky PML(N) and fortunate leaders” written by Agha Iqrar Haroon and published by daily Pakistan Today. 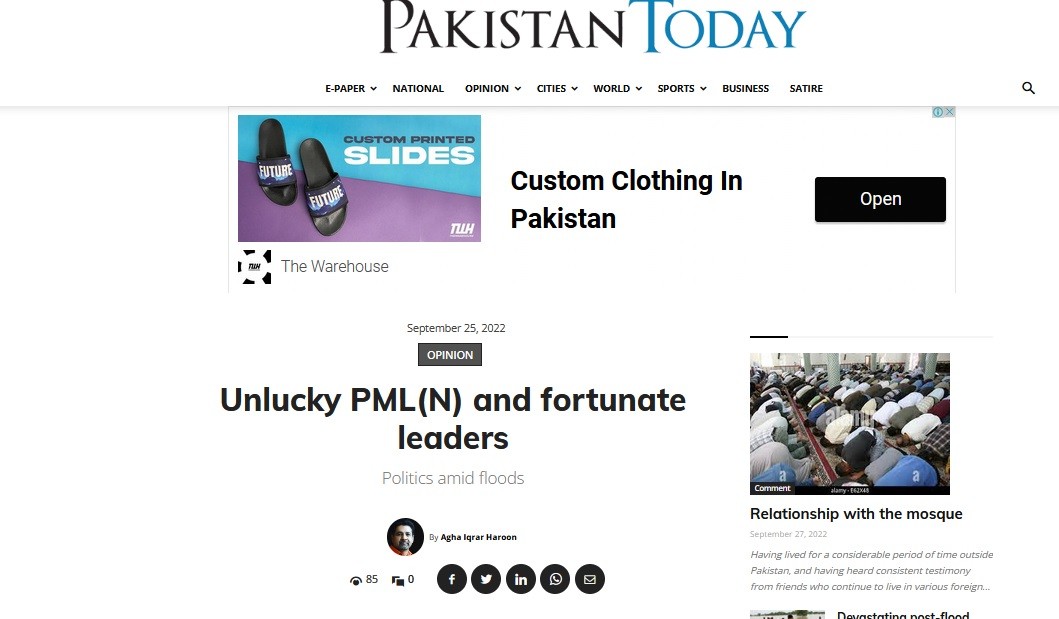 The writer indicates that unlucky supreme leader Mian Nawaz Sharif cannot appear on television screens. Same time Imran Khan’s meeting with COAS Gen Qamar Bajwa at Presidency cannot be ignored. Inter Service Public Relations (ISPR) of the Armed forces did not release any statement about this meeting but certain journalists who are known for their access to military circles publish articles citing “sources” and stating that the meeting was a failure to bridge the differences while PTI is using this meeting otherwise and PTI circles are claiming “all is well” and Khan has been blessed again with advice to go back to National Assembly and wait till March 2023. President Dr. Alvi and Chief Justice of the Supreme Court have already advised PTI to withdraw resignations that have not been approved yet. The writer indicates that the stars of Imran Khan are arranging his return to National Assembly and then the seat of Prime Minister would not be far away from him as he is the fortunate son of power stars.